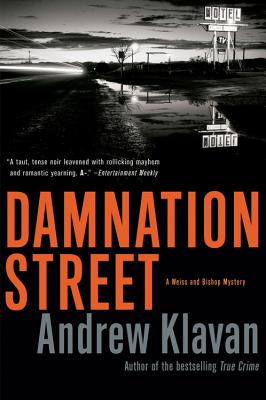 They are two sworn enemies with a single obsession: a woman on the run from them both.

Scott Weiss is a private detective. John Foy is a profes­sional killer. The woman is Julie Wyant, a hooker with the face of an angel.

Julie spent one night with Foy—a night of psycho­pathic cruelty that Foy called love. Desperate to get away from him, she vanished without a trace. And Foy wants her back.

There’s only one man who can find her: Weiss, the best locate operative in the business. She’s begged him not to look for her, fearing he’ll bring the killer in his wake. But Weiss can’t stay away.

Now, from a town called Paradise, through a wilder­ness that feels like hell, Weiss searches for Julie—and the killer follows, waiting for his chance.

They are two expert hunters matching move for move—until it ends on Damnation Street.

"Andrew Klavan is doing something that is rarely done . . . a unique angle on the private-eye novel."--Michael Connelly

"Klavan does tough-guy heroes and sexual tension better than anyone writing today."--Janet Evanovich

ANDREW KLAVAN is the author of the best-selling novels True Crime, filmed by Clint Eastwood, and Don’t Say a Word, a film starring Michael Douglas. His work has been nominated for the Edgar Award five times and has won twice. He is a contributing editor at City Journal and his articles have appeared, among other places, in the Wall Street Journal, the New York Times, and the Los Angeles Times. He lives in Southern California with his wife Ellen. They have a daughter, Faith, and a son, Spencer.