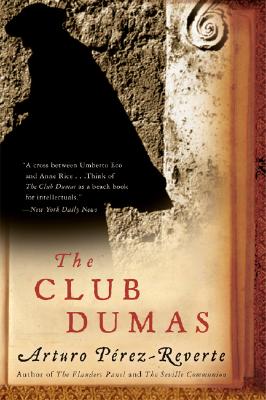 Lucas Corso is a book detective, a middle-aged mercenary hired to hunt down rare editions for wealthy and unscrupulous clients. When a well-known bibliophile is found dead, leaving behind part of the original manuscript of Alexandre Dumas's The Three Musketeers, Corso is brought in to authenticate the fragment. He is soon drawn into a swirling plot involving devil worship, occult practices, and swashbuckling derring-do among a cast of characters bearing a suspicious resemblance to those of Dumas's masterpiece. Aided by a mysterious beauty named for a Conan Doyle heroine, Corso travels from Madrid to Toledo to Paris on the killer's trail in this twisty intellectual romp through the book world.


Praise For The Club Dumas…

PRAISE FOR THE CLUB DUMAS
"An intelligent and delightful novel." -THE NEW YORK TIMES BOOK REVIEW

"A cross between Umberto Eco and Anne Rice . . . Think of The Club Dumas as a beach read for intellectuals."-THE NEW YORK DAILY NEWS

ARTURO PEREZ-REVERTE is the author of many critically acclaimed novels, including The Club Dumas, The Flanders Panel, and the Captain Alatriste series. A retired war journalist, he lives in Madrid and is a member of the Royal Spanish Academy.
Loading...
or support indie stores by buying on