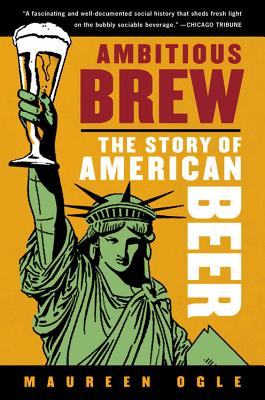 The Story of American Beer

In the first-ever history of American beer, Maureen Ogle tells its epic story, from the immigrants who invented it to the upstart microbrewers who revived it.
Beer might seem as American as baseball, but that has not always been true: Rum and whiskey were the drinks of choice in the 1840s, with only a few breweries making heavy, yeasty English ale. When a wave of German immigrants arrived in the middle of the nineteenth century, they promptly set about re-creating the pleasures of the biergartens they had left behind.

Just fifty years later, the American-style lager beer they invented was the nation’s most popular beverage—and brewing was the nation’s fifth-largest industry, ruled over by fabulously wealthy titans Frederick Pabst and Adolphus Busch. But when anti-German sentiments aroused by World War I fed the flames of the temperance movement (one activist even declared that “the worst of all our German enemies are Pabst, Schlitz, Blatz, and Miller”), Prohibition was the result. In the wake of its repeal, brewers replaced flavor with innovations like marketing and lite beer, setting the stage for a generation of microbrewers whose ambitions reshaped the drink.

Grab a glass and settle in for the surprising story behind your favorite pint.

Praise For Ambitious Brew: The Story of American Beer…

"A fascinating and well-documented social history that sheds fresh light on the bubbly sociable beverage."--Chicago Tribune

MAUREEN OGLE is a historian and the author of several books, including In Meat We Trust: An Unexpected History of Carnivore America and Ambitious Brew: The Story of American Beer. Her website can be found at www.maureenogle.com. She lives in Ames, Iowa.