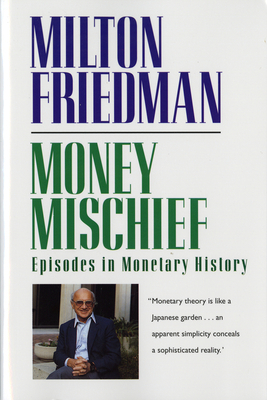 "A lively, enlightening introduction to monetary history…from monetarism's most articulate apostle."??—??Kirkus Reviews"The Oliver Stone of economics" (Chicago Tribune), Nobel Prize laureate Milton Friedman makes clear once and for all that no one, from the local corner merchant to the Wall Street banker to the president of the United States, is immune from monetary economics. In Money Mischief, Friedman discusses the creation of value: from stones to feathers to gold. He outlines the central role of monetary theory and shows how it can act to ignite or deepen inflation. Through colorful historical episodes, he demonstrates the mischief that can result from a misunderstanding of monetary economics ??—?? how, for example, the work of two obscure Scottish chemists destroyed the presidential prospects of William Jennings Bryan and how Franklin D. Roosevelt's decision to appease a few senators from the American West helped communism triumph in China. And he explains, in plain English, what the present monetary system in the United States means for your paycheck and your savings as well as for the global economy.

MILTON FRIEDMAN (1912–2006), Nobel laureate economist and former presidential adviser, was the author of a number of books, including Capitalism and Freedom and Tyranny of the Status Quo, also written with his wife, Rose Friedman (1910–2009).
Loading...
or support indie stores by buying on