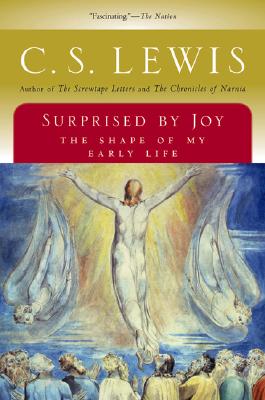 The Shape of My Early Life

"A young man who wishes to remain a sound Atheist cannot be too careful of his reading. There are traps everywhere . . . God is, if I may say it, very unscrupulous."This book is not an autobiography. It is not a confession. It is, however, certainly one of the most beautiful and insightful accounts of a person coming to faith. Here, C.S. Lewis takes us from his childhood in Belfast through the loss of his mother, to boarding school and a youthful atheism in England, to the trenches of World War I, and then to Oxford, where he studied, read, and, ultimately, reasoned his way back to God. It is perhaps this aspect of Surprised by Joy that we—believers and nonbelievers—find most compelling and meaningful; Lewis was searching for joy, for an elusive and momentary sensation of glorious yearning, but he found it, and spiritual life, through the use of reason. In this highly personal, thoughtful, intelligent memoir, Lewis guides us toward joy and toward the surprise that awaits anyone who seeks a life beyond the expected."Lewis tempered his logic with a love for beauty, wonder, and magic . . . He speaks to us with all the power and life-changing force of a Plato, a Dante, and a Bunyan."—Christianity Today"The tension of these final chapters holds the interest like the close of a thriller."—Times Literary SupplementC. S. (Clive Staples) Lewis (1898–1963), one of the great writers of the twentieth century, also continues to be one of our most influential Christian thinkers. He wrote more than thirty books, both popular and scholarly, including The Chronicles of Narnia series, The Screwtape Letters, The Four Loves, Mere Christianity, and Till We Have Faces.

C. S. (Clive Staples) Lewis (1898-1963), one of the great writers of the twentieth century, also continues to be one of our most influential Christian thinkers. A Fellow and tutor at Oxford until 1954, he spent the rest of his career as Chair of Medieval and Renaissance English at Cambridge. He wrote more than thirty books, both popular and scholarly, inlcuding The Chronicles of Narnia series, The Screwtape Letters, The Four Loves, Mere Christianity and Surprised by Joy.
Loading...
or
Not Currently Available for Direct Purchase