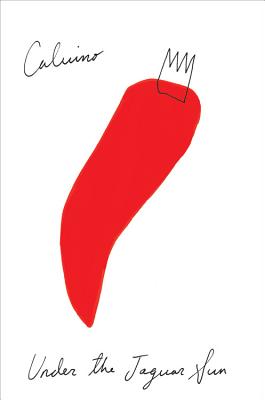 Under the Jaguar Sun (Paperback)

“The thought . . . called up the flavors of an elaborate and bold cuisine, bent on making the flavors’ highest notes vibrate, juxtaposing them in modulations, in chords, and especially in dissonances that would assert themselves as an incomparable experience.” — From Under the Jaguar Sun

These intoxicating stories delve down to the core of our senses of taste, hearing, and smell. Amid the flavors of Mexico’s fiery chiles and spices, a couple on holiday discovers dark truths about the maturing of desire in the title story, “Under the Jaguar Sun.” In “A King Listens,” a gripping portrait of a frenzied mind, the menacing echoes in a huge palace spur a tyrant’s thoughts to the heights of paranoid intensity. “The Name, the Nose” drives to a startling conclusion as men across time and space pursue the women whose aromas have enchanted them. Mordant and deliciously offbeat, this trio of tales is a treat from a master of short fiction.

ITALO CALVINO (1923–1985) attained worldwide renown as one of the twentieth century’s greatest storytellers. Born in Cuba, he was raised in San Remo, Italy, and later lived in Turin, Paris, Rome, and elsewhere. Among his many works are Invisible Cities, If on a winter’s night a traveler, The Baron in the Trees, and other novels, as well as numerous collections of fiction, folktales, criticism, and essays. His works have been translated into dozens of languages.
or
Not Currently Available for Direct Purchase
Copyright © 2020 American Booksellers Association