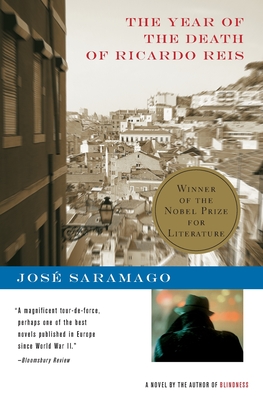 The Year Of The Death Of Ricardo Reis

The year is 1936, and the dictator António de Oliveira Salazar is establishing himself in Portugal, edging his country toward civil war. At the same time, Dr. Ricardo Reis has returned home to Lisbon after a long sojourn in Brazil. What’s brought him back is word that the great poet, Fernando Pessoa, has died. With no intention of resuming his practice, Reis now dabbles in his own poetry, wastes his days strolling the boulevards and back streets, engages in affairs with two different women??—??and is followed through each excursion by Pessoa’s ghost.

As a fascist revolution roils, and as Reis’s path intersects with three relative strangers??—??two living, one dead??—??Reis may finally discover the reality of his own chimerical existence.

Called “a magnificent tour-de-force, perhaps one of the best novels published in Europe since World War II” (Bloomsbury Review) and “altogether remarkable” (Wall Street Journal), The Year of the Death of Ricardo Reis is a PEN Award winner.