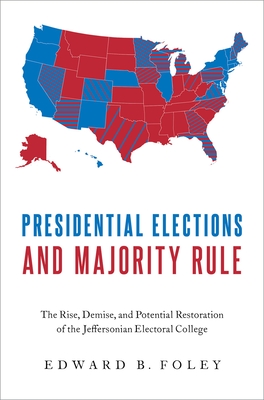 The Rise, Demise, and Potential Restoration of the Jeffersonian Electoral College

The Electoral College that governs America has been with us since 1804, when Thomas Jefferson's supporters redesigned it for his re-election. The Jeffersonians were motivated by the principle of majority rule. Gone were the days when a president would be elected by acclamation, as George Washington had been. Instead, given the emergence of intense two-party competition, the Jeffersonians wanted to make sure that the Electoral College awarded the presidency to the candidate of the majority, rather than minority, party. They also envisioned that a candidate would win by amassing a majority of Electoral College votes secured from states where the candidate's party was in the majority. For most of American history, this system has worked as intended, producing presidents who won Electoral College victories derived from state-based majorities. In the last quarter-century, however, there have been three significant aberrations from the Jeffersonian design: 1992, 2000, and 2016. In each of these years, the Electoral College victory depended on states where the winner received only a minority of votes. In this authoritative history of the American Electoral College system, Edward Foley analyzes the consequences of the unparalleled departure from the Jeffersonians' original intent-and delineates what we can do about it. He explains how states, by simply changing their Electoral College procedures, could restore the original Jeffersonian commitment to majority rule. There are various ways to do this, all of which comply with the Constitution. If only a few states had done so before 2016, the outcome might have been different. Doing so before future elections can prevent another victory that, contrary to the original Jeffersonian intent, a majority of voters did not want.

Edward B. Foley directs the election law program at Ohio State University, where he also holds the Ebersold Chair in Constitutional Law. Previously, Foley clerked for Chief Judge Patricia M. Wald of the U.S. Court of Appeals for the D.C. Circuit and Justice Harry Blackmun of the United States Supreme Court. He has also served as State Solicitor in the office of Ohio's Attorney General, where he was responsible for the state's appellate and constitutional litigation. He is the author of the acclaimed book Ballot Battles: The History of Disputed Elections in the United States (Oxford University Press) and co-author of Election Law and Litigation: The Judicial Regulation of Politics.
Loading...
or support indie stores by buying on