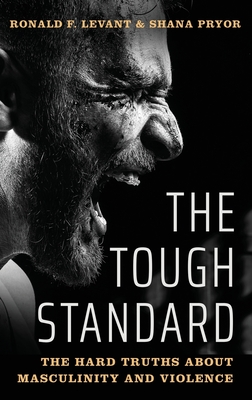 The Hard Truths about Masculinity and Violence

Men are commonly expected to act masculine (e.g., self-sufficient, stoic, strong, dependable, brave, tough, and hard-working) while avoiding stereotypically feminine traits (e.g., emotional expressivity, empathy, and nurturance). Few, however, realize that these qualities--when taken to
the extreme--can cause emotional constriction, substance abuse, depression, aggression, and violence in many men. Further, even though most men are not violent, decades of research has shown that masculinity is distinctly related to sexual and gun violence and men's poorer health. Considering how
girls and women have benefitted from decades of conversations on navigation of their gender in a changing world, similar processes are urgently needed for boys and men. The Tough Standard connects the dots between masculinity and the present moment in American culture (defined by high-profile
movements such as Me Too, March for Our Lives, and Black Lives Matter), synthesizes over four decades of research in the psychology of men and masculinities, and proposes solutions to corresponding social problems.

Ronald F. Levant, EdD, ABPP, is Professor Emeritus of Psychology at The University of Akron; Past President of the American Psychological Association (APA) and APA Division 51; and two-term Editor of APA Division 51's quarterly journal, Psychology of Men & Masculinities. He has developed andevaluated a number of measures designed to assess a variety of gender constructs. Dr. Levant's signature contribution has been in establishing the empirical foundation for the Normative Male Alexithymia hypothesis. In addition, he developed Alexithymia Reduction Treatment (ART), a briefpsychoeducational intervention designed to remediate normative male alexithymia in order to prepare men to engage more fully in psychotherapy. Shana Pryor, MA, is a doctoral student of Counseling Psychology at The University of Akron. She has spent the majority of her career focusing on issues surrounding men, masculinity, and sexual trauma.
Loading...
or support indie stores by buying on