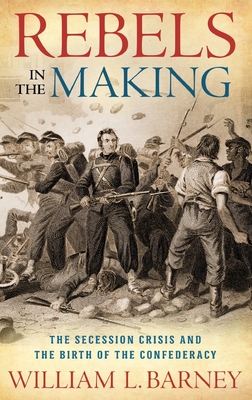 Rebels in the Making

The Secession Crisis and the Birth of the Confederacy

Regardless of whether they owned slaves, Southern whites lived in a world defined by slavery. As shown by their blaming British and Northern slave traders for saddling them with slavery, most were uncomfortable with the institution. While many wanted it ended, most were content to leave that up to God. All that changed with the election of Abraham Lincoln.
Rebels in the Making is a narrative-driven history of how and why secession occurred. In this work, senior Civil War historian William L. Barney narrates the explosion of the sectional conflict into secession and civil war. Carefully examining the events in all fifteen slave states and distinguishing the political circumstances in each, he argues that this was not a mass democratic movement but one led from above. The work begins with the deepening strains within Southern society as the slave economy matured in the mid-nineteenth century and Southern ideologues struggled to convert whites to the orthodoxy of slavery as a positive good. It then focuses on the years of 1860-1861 when the sectional conflict led to the break-up of the Union. As foreshadowed by the fracturing of the Democratic Party over the issue of federal protection for slavery in the territories, the election of 1860 set the stage for secession. Exploiting fears of slave insurrections, anxieties over crops ravaged by a long drought, and the perceived moral degradation of submitting to the rule of an antislavery Republican, secessionists launched a movement in South Carolina that spread across the South in a frenzied atmosphere described as the great excitement. After examining why Congress was unable to reach a compromise on the core issue of slavery's expansion, the study shows why secession swept over the Lower South in January of 1861 but stalled in the Upper South. The driving impetus for secession is shown to have come from the middling ranks of the slaveholders who saw their aspirations of planter status blocked and denigrated by the Republicans. A separate chapter on the formation of the Confederate government in February of 1861 reveals how moderates and former conservatives pushed aside the original secessionists to assume positions of leadership. The final chapter centers on the crisis over Fort Sumter, the resolution of which by Lincoln precipitated a second wave of secession in the Upper South. Rebels in the Making shows that secession was not a unified movement, but has its own proponents and patterns in each of the slave states. It draws together the voices of planters, non-slaveholders, women, the enslaved, journalists, and politicians. This is the definitive study of the seminal moment in Southern history that culminated in the Civil War.

William L. Barney is Professor of History at the University of North Carolina at Chapel Hill. He is the author of The Oxford Encyclopedia of the Civil War (OUP, 2011);The Making of a Confederate: Walter Lenoir's Civil War (OUP, 2007); and The Secessionist Impulse: Alabama and Mississippi in 1860, among other titles.
Loading...
or support indie stores by buying on