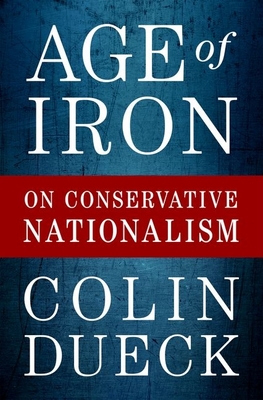 The rise of a populist conservative nationalism in the United States has triggered unease at home and abroad. Riding the populist wave, Donald Trump achieved the presidency advocating a hardline nationalist approach. Yet critics frequently misunderstand the Trump administration's foreign policy, along with American nationalism. In Age of Iron, leading authority on Republican foreign policy Colin Dueck demonstrates that conservative nationalism is the oldest democratic tradition in US foreign relations. Designed to preserve self-government, conservative nationalism can be compatible with engagement overseas. But 21st century diplomatic, economic, and military frustrations led to the resurgence of a version that emphasizes US material interests. No longer should the US allow its allies to free-ride, and nor should it surrender its sovereignty to global governance institutions. Because this return is based upon forces larger than Trump, it is unlikely to disappear when he leaves office. Age of Iron describes the shifting coalitions over the past century among foreign policy factions within the Republican Party, and shows how Trump upended them starting in 2015-16. Dueck offers a balanced summary and assessment of President Trump's foreign policy approach, analyzing its strengths and weaknesses. He also describes the current interaction of conservative public opinion and presidential foreign policy leadership in the broader context of political populism. Finally, he makes the case for a forward-leaning realism, based upon the understanding that the US is entering a protracted period of geopolitical competition with other major powers. The result is a book that captures the past, present, and, possibly, future of conservative foreign policy nationalism in the US.

Colin Dueck is a Professor at George Mason University's Schar School of Policy and Government, and a non-resident fellow at the American Enterprise Institute. He has worked as a foreign policy adviser on several Republican presidential campaigns, and has acted as a consultant for the Department of State, the Department of Defense, and the National Security Council. His previous books include Reluctant Crusaders, Hard Line, and The Obama Doctrine (Oxford).
or support indie stores by buying on
Copyright © 2020 American Booksellers Association