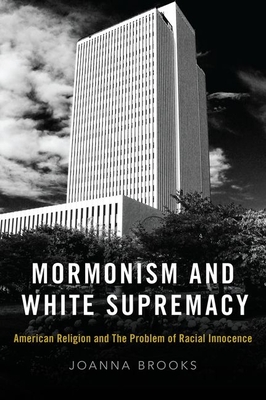 American Religion and the Problem of Racial Innocence

To this day, churchgoing Mormons report that they hear from their fellow congregants in Sunday meetings that African-Americans are the accursed descendants of Cain whose spirits--due to their lack of spiritual mettle in a premortal existence--were destined to come to earth with a "curse" of black skin. This claim can be made in many Mormon Sunday Schools without fear of contradiction. You are more likely to encounter opposition if you argue that the ban on the ordination of Black Mormons was a product of human racism. Like most difficult subjects in Mormon history and practice, says Joanna Brooks, the priesthood and temple ban on Blacks has been managed carefully in LDS institutional settings with a combination of avoidance, denial, selective truth-telling, and determined silence.
As America begins to come to terms with the costs of white privilege to Black lives, this book urges a soul-searching examination of the role American Christianity has played in sustaining everyday white supremacy by assuring white people of their innocence. In Mormonism and White Supremacy, Joanna Brooks offers an unflinching look at her own people's history and culture and finds in them lessons that will hit home for every scholar of American religion and person of faith.

Joanna Brooks is an award-winning scholar of American religion, race, gender, and culture, a human rights activist, and the author or editor of ten books including Mormon Feminism: Essential Writings.
Loading...
or support indie stores by buying on