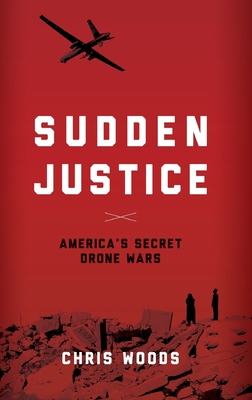 Less than a month after the September 11th attacks, a tiny, CIA-controlled Predator drone flew over Kandahar, searching out the home of the Taliban supreme commander Mullah Mohammed Omar. A lack of understanding of the drone's capabilities combined with a messy chain of command allowed Omar to escape, but the strike on a nearby convoy vehicle became the Predator's first lethal action. Since then, the use of armed drones has become the dominant American way of war. In Sudden Justice, award-winning investigative journalist Chris Woods explores the secretive history of the United States' use of armed drones and their key role not only on today's battlefields, but also in a covert targeted killing project that has led to the deaths of thousands. The CIA nurtured and developed drones before the War on Terror ever began, seeking a platform from which it could monitor its targets and act lethally and instantly on the intelligence it gathered. Since then, remotely piloted aircraft have played a critical role in America's global counter-terrorism operations and have been deployed to devastating effect in conventional wars in Afghanistan, Iraq, and Libya. Drone crews, analysts, intelligence officials and military commanders all speak frankly to the author about how armed drones revolutionized warfare--and the unexpected costs to some of those involved. But there is another, secret war--one in which drones scour the skies of Yemen, Pakistan, and Somalia in search of militant and terrorist targets. The American government insists that this hidden war is legal. The CIA even claims that its armed drones are the most precise weapon ever invented, so perfect that civilians are no longer killed. Sudden Justice describes the reality of this secret drone war, one in which hundreds of civilians have died, and the wider strategic interests of the United States may have been jeopardized. The ability to target its enemies from the safety of headquarters thousands of miles from the battlefield has profound implications for how America conducts its foreign policy, and for how it is seen in the world. As the first book to comprehensively assemble and analyze the facts about the U.S. drone program, Sudden Justice is the essential guide for understanding its implications.

Chris Woods is an investigative journalist who specializes in conflict and national security issues. A former senior BBC Panorama producer, he has authored several investigations into covert U.S. drone strikes and their true effects. He was awarded the Martha Gellhorn Journalism Prize for his work, and lives in London.
Loading...
or support indie stores by buying on