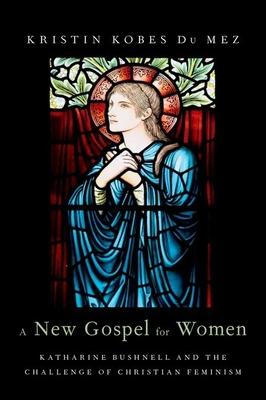 A New Gospel for Women

Katharine Bushnell and the Challenge of Christian Feminism

A New Gospel for Women tells the story of Katharine Bushnell (1855-1946), author of God's Word to Women, one of the most innovative and comprehensive feminist theologies ever written. An internationally-known social reformer and women's rights activist, Bushnell rose to prominence through her highly publicized campaigns against prostitution and the trafficking of women in America, in colonial India, and throughout East Asia. In each of these cases, the intrepid reformer struggled to come to terms with the fact that it was Christian men who were guilty of committing acts of appalling cruelty against women. Ultimately, Bushnell concluded that Christianity itself - or rather, the patriarchal distortion of true Christianity - must be to blame. A work of history, biography, and historical theology, Kristin Kobes DuMez's book provides a vivid account of Bushnell's life. It maps a concise introduction to her fascinating theology, revealing, for example, Bushnell's belief that gender bias tainted both the King James and the Revised Versions of the English Bible. As Du Mez demonstrates, Bushnell insisted that God created women to be strong and independent, that Adam, not Eve, bore responsibility for the Fall, and that it was through Christ, "the great emancipator of women," that women would achieve spiritual and social redemption. A New Gospel for Women restores Bushnell to her rightful place in history. It illuminates the dynamic and often thorny relationship between faith and feminism in modern America by mapping Bushnell's story and her subsequent disappearance from the historical record. Most pointedly, the book reveals the challenges confronting Christian feminists today who wish to construct a sexual ethic that is both Christian and feminist, one rooted not in the Victorian era, but rather one suited to the modern world.

Kristin Kobes Du Mez is an associate professor of History and Gender Studies at Calvin College. She received a Ph.D. in American Religious History from the University of Notre Dame. Her research interests include the intersection of religion, gender, and sexuality in American history, with a particular focus on women in American Protestantism from the nineteenth century to the present.
Loading...
or support indie stores by buying on