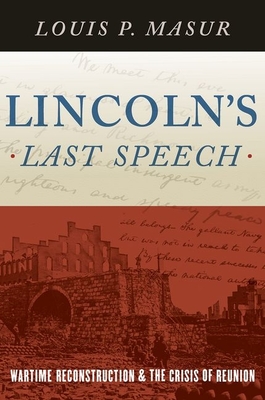 What did Abraham Lincoln envision when he talked about reconstruction? Assassinated in 1865, the president did not have a chance to begin the work of reconciling the North and South, nor to oversee Reconstruction as an official postwar strategy. Yet his final speech, given to thousands gathered in the rain outside the White House on April 11, 1865, gives a clear indication of what Lincoln's postwar policy might have looked like-one that differed starkly from what would emerge in the tumultuous decade that followed. In Lincoln's Last Speech, renowned historian and author Louis P. Masur offers insight into this critical address and its vision of a reconstructed United States. Coming two days after Robert E. Lee's surrender at Appomattox and a week after the fall of Richmond, Lincoln's speech was expected to be a victory oration. Instead, he looked to the future, discussing how best to restore the seceded states to the national government, and even endorsing limited black suffrage. Delving into the language and arguments of Lincoln's last address, Masur traces the theme of reconstruction as it developed throughout his presidency, starting with the very earliest days of the war. Masur illuminates the evolution of Lincoln's thinking and the national debate around reconstruction, touching on key moments such as the Proclamation of Amnesty and Reconstruction on December 8, 1863, and Lincoln's pocket veto of the Wade-Davis bill in July 1864. He also examines social reconstruction, including the plight of freedmen and the debate over the place of blacks in society; and considers the implications of Lincoln's speech after April 1865, when Andrew Johnson assumed office and the ground was laid for the most radical phases of the postwar policy. A nuanced study of Lincoln's views on national reconciliation, this work gives us a better understanding of the failures that occurred with postwar Reconstruction and the eventual path that brought the country to reunion.

Louis P. Masur is Distinguished Professor of American Studies and History at Rutgers University. He is the author of many books, including, most recently, The Civil War: A Concise History and Lincoln's Hundred Days: The Emancipation Proclamation and the War for the Union.
Loading...
or support indie stores by buying on