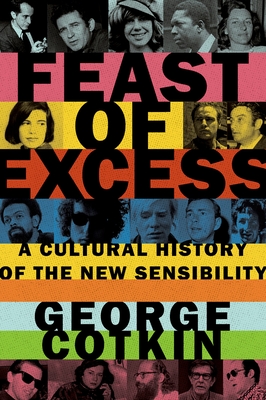 A Cultural History of the New Sensibility

In 1952, John Cage shocked audiences with 4'33", his compositional ode to the ironic power of silence. From Cage's minimalism to Chris Burden's radical performance art two decades later (in one piece he had himself shot), the post-war American avant-garde shattered the divide between low and high art, between artist and audience. They changed the cultural landscape. Feast of Excess is an engaging and accessible portrait of "The New Sensibility," as it was named by Susan Sontag in 1965. The New Sensibility sought to push culture in extreme directions: either towards stark minimalism or gaudy maximalism. Through vignette profiles of prominent figures-John Cage, Patricia Highsmith, Allen Ginsberg, Andy Warhol, Anne Sexton, John Coltrane, Bob Dylan, Erica Jong, and Thomas Pynchon, to name a few-George Cotkin presents their bold, headline-grabbing performances and places them within the historical moment. This inventive and jaunty narrative captures the excitement of liberation in American culture. The roots of this release, as Cotkin demonstrates, began in the 1950s, boomed in the 1960s, and became the cultural norm by the 1970s. More than a detailed immersion in the history of cultural extremism, Feast of Excess raises provocative questions for our present-day culture.