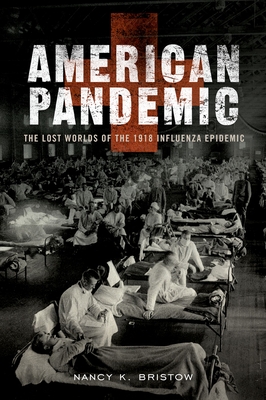 The Lost Worlds of the 1918 Influenza Epidemic

Between the years 1918 and1920, influenza raged around the globe in the worst pandemic in recorded history, killing at least fifty million people, more than half a million of them Americans. Yet despite the devastation, this catastrophic event seems but a forgotten moment in our nation's past. American Pandemic offers a much-needed corrective to the silence surrounding the influenza outbreak. It sheds light on the social and cultural history of Americans during the pandemic, uncovering both the causes of the nation's public amnesia and the depth of the quiet remembering that endured.
Focused on the primary players in this drama--patients and their families, friends, and community, public health experts, and health care professionals--historian Nancy K. Bristow draws on multiple perspectives to highlight the complex interplay between social identity, cultural norms, memory, and
the epidemic. Bristow has combed a wealth of primary sources, including letters, diaries, oral histories, memoirs, novels, newspapers, magazines, photographs, government documents, and health care literature. She shows that though the pandemic caused massive disruption in the most basic patterns of
American life, influenza did not create long-term social or cultural change, serving instead to reinforce the status quo and the differences and disparities that defined American life. As the crisis waned, the pandemic slipped from the nation's public memory. The helplessness and despair Americans had suffered during the pandemic, Bristow notes, was a story poorly suited to a nation focused on optimism and progress. For countless survivors, though, the trauma never ended,
shadowing the remainder of their lives with memories of loss. This book lets us hear these long-silent voices, reclaiming an important chapter in the American past.

Nancy K. Bristow is Professor of History at the University of Puget Sound in Tacoma, Washington. She is the author of Making Men Moral: Social Engineering during the Great War. Bristow is the great-granddaughter of two of the pandemic's fatalities.
Loading...
or support indie stores by buying on