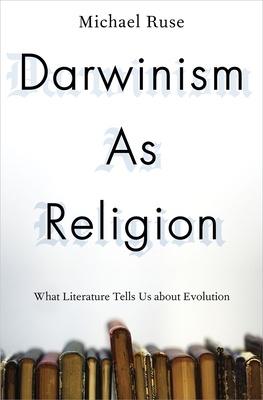 What Literature Tells Us about Evolution

The Darwinian Revolution--the change in thinking sparked by Charles Darwin's On the Origin of Species, which argued that all organisms including humans are the end product of a long, slow, natural process of evolution rather than the miraculous creation of an all-powerful God--is one of the
truly momentous cultural events in Western Civilization. Darwinism as Religion is an innovative and exciting approach to this revolution through creative writing, showing how the theory of evolution as expressed by Darwin has, from the first, functioned as a secular religion. Drawing on a deep understanding of both the science and the history, Michael Ruse surveys the naturalistic thinking about the origins of organisms, including the origins of humankind, as portrayed in novels and in poetry, taking the story from its beginnings in the Age of Enlightenment in the 18th
century right up to the present. He shows that, contrary to the opinion of many historians of the era, there was indeed a revolution in thought and that the English naturalist Charles Darwin was at the heart of it. However, contrary also to what many think, this revolution was not primarily
scientific as such, but more religious or metaphysical, as people were taken from the secure world of the Christian faith into a darker, more hostile world of evolutionism. In a fashion unusual for the history of ideas, Ruse turns to the novelists and poets of the period for inspiration and information. His book covers a wide range of creative writers - from novelists like Voltaire and poets like Erasmus Darwin in the eighteenth century, through the nineteenth century
with novelists including Elizabeth Gaskell, George Eliot, Thomas Hardy, Henry James and H. G. Wells and poets including Robert Browning, Alfred Tennyson, Walt Whitman, Emily Dickinson and Gerard Manley Hopkins, and on to the twentieth century with novelists including Edith Wharton, D. H. Lawrence,
John Steinbeck, William Golding, Graham Greene, Ian McEwan and Marilynne Robinson, and poets including Robert Frost, Edna St Vincent Millay and Philip Appleman. Covering such topics as God, origins, humans, race and class, morality, sexuality, and sin and redemption, and written in an engaging
manner and spiced with wry humor, Darwinism as Religion gives us an entirely fresh, engaging and provocative view of one of the cultural highpoints of Western thought.

Michael Ruse was born in England in 1940. In 1962 he moved to Canada and taught philosophy for thirty-five years at the University of Guelph in Ontario, before taking his present position at Florida State University in 2000. He is a philosopher and historian of science, with a particular interestin Darwin and evolutionary biology. The author or editor of over fifty books and the founding editor of the journal Biology and Philosophy, he is a fellow of the Royal Society of Canada, a former Guggenheim Fellow and Gifford Lecturer, and the recipient of four honorary degrees.
Loading...
or support indie stores by buying on