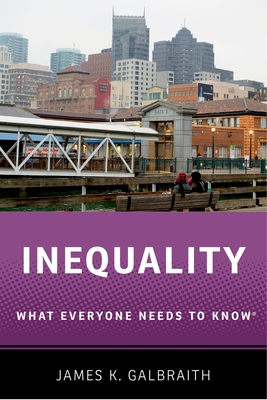 Over the past thirty years, the issue of economic inequality has emerged from the backwaters of economics to claim center stage in the political discourse of America and beyond---a change prompted by a troubling fact: numerous measures of income inequality, especially in the United States in
the last quarter of the twentieth century, have risen sharply in recent years. Even so, many people remain confused about what, exactly, politicians and media persons mean when they discuss inequality. What does economic inequality mean? How is it measured? Why should we care? Why did inequality
rise in the United States? Is rising inequality an inevitable feature of capitalism? What should we do about it? Inequality: What Everyone Needs to Know takes up these questions and more in plain and clear language, bringing to life one of the great economic and political debates of our age. Inequality expert James K. Galbraith has compiled the latest economic research on inequality and explains his findings
in a way that everyone can understand. He offers a comprehensive introduction to the study of economic inequality, including its philosophical and theoretical origins, the variety of concepts in wide use, empirical measures and their advantages and disadvantages, competing modern theories of the
causes and effects of rising inequality in the United States and worldwide, and a range of policy measures. The topic of economic inequality is going to become only more important as we approach the 2016 presidential elections. This latest addition to the popular What Everyone Needs to Know series from Oxford University Press will tell you everything you need to know to make informed opinions on this
significant issue.

James K. Galbraith teaches at The University of Texas at Austin. He holds degrees from Harvard and Yale, and was a Marshall Scholar at King's College, Cambridge. He served as Executive Director of the Joint Economic Committee, US Congress, in the early 1980s. In 2010 he was elected to the AccademiaNazionale dei Lincei. In 2012, he was President of the Association for Evolutionary Economics. He is the 2014 co-winner of the Leontief Prize for advancing the frontiers of economic thought.
Loading...
or support indie stores by buying on