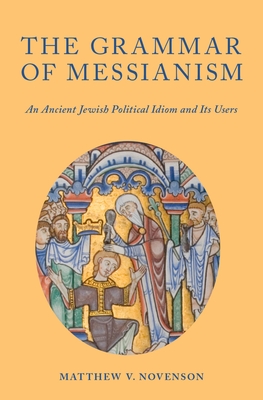 The Grammar of Messianism (Hardcover)

An Ancient Jewish Political Idiom and Its Users

Messianism is one of the great themes in intellectual history. But because it has done so much important ideological work for the people who have written about it, the historical roots of the discourse have been obscured from view. What did it mean to talk about "messiahs" in the ancient world, before the idea of messianism became a philosophical juggernaut, dictating the terms for all subsequent discussion of the topic? In this book, Matthew V. Novenson offers a revisionist account of messianism in antiquity. He shows that, for the ancient Jews and Christians who used the term, a messiah was not an article of faith but a manner of speaking. It was a scriptural figure of speech, one among numerous others, useful for thinking about kinds of political order: present or future, real or ideal, monarchic or theocratic, dynastic or charismatic, and other variations besides. The early Christians famously seized upon the title "messiah" (in Greek, "Christ") for their founding hero and molded the sense of the term in certain ways; but, Novenson shows, this is just what all ancient messiah texts do, each in its own way. If we hope to understand the ancient texts about messiahs (from Deutero-Isaiah to the Parables of Enoch, from the Qumran Community Rule to the Gospel of John, from the Pseudo-Clementines to Sefer Zerubbabel), we must learn to think not in terms of a world-historical idea but of a language game, of so many creative reuses of an archaic Israelite idiom. In The Grammar of Messianism, Novenson demonstrates the possibility and the benefit of thinking of messianism in this way.

Matthew V. Novenson is Senior Lecturer in New Testament and Christian Origins at the University of Edinburgh. He has also been a visiting professor at Dartmouth College and Duke University and a visiting research fellow at Durham University. He is the author of Christ among the Messiahs (Oxford University Press, 2012).
or
Not Currently Available for Direct Purchase
Copyright © 2020 American Booksellers Association