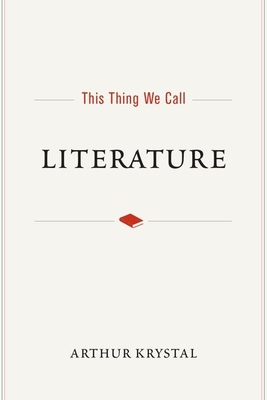 This Thing We Call Literature (Hardcover)

In his fourth book of essays, acclaimed cultural critic Arthur Krystal surveys the world of letters in its academic, literary, and populist incarnations--just to make sure those divisions still apply. What he finds is that the ground has shifted. With Lionel Trilling at his back, Krystal casts a cold eye on contemporary culture and discerns a lack of discrimination between the truly great and the merely good, and the fairly good and just plain bad. Critical but not angst-ridden, he deplores tunnel vision on both sides of the culture wars. Presumptive cultural boundaries have no place here. Krystal admires Bob Dylan and Elmore Leonard without including them in a purely literary pantheon. He endorses the Great Books without necessarily voting the Republican ticket. In essays about the meaning of the novel, the role of music in poetry, genre fiction vs. literary fiction, the contributions of the superlative critic Erich Auerbach, and the strange alliance of neurology and aesthetics, as well as in lighter pieces about reviewing and list-making, Krystal brings his own brand of discriminating intelligence to a spectrum of received opinions whose flaws and cracks otherwise go unnoticed.

Arthur Krystal has written for The New Yorker, Harper's, American Scholar, the Times Literary Supplement, The New York Times Book Review, and other publications. He is the author of The Half-Life of an American Essayist, Agitations: Essays on Life and Literature, and Except When I Write: Reflections of a Recovering Critic. He lives in New York City.
or support indie stores by buying on
Copyright © 2020 American Booksellers Association