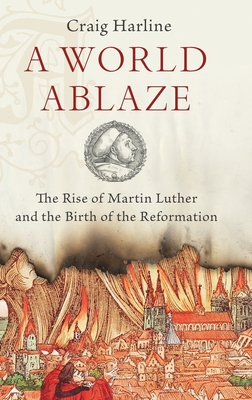 The Rise of Martin Luther and the Birth of the Reformation

October 2017 marks five hundred years since Martin Luther nailed his 95 theses to the church door in Wittenberg and launched the Protestant Reformation. At least, that's what the legend says. But with a figure like Martin Luther, who looms so large in the historical imagination, it's hard to
separate the legend from the life, or even sometimes to separate assorted legends from each other. Over the centuries, Luther the man has given way to Luther the icon, a polished bronze figure on a pedestal. In A World Ablaze, Craig Harline introduces us to the flesh-and-blood Martin Luther. Harline tells the riveting story of the first crucial years of the accidental crusade that would make Luther a legendary figure. He didn't start out that way; Luther was a sometimes-cranky friar and professor who
worried endlessly about the fate of his eternal soul. He sought answers in the Bible and the Church fathers, and what he found distressed him even more -- the way many in the Church had come to understand salvation was profoundly wrong, thought Luther, putting millions of souls, not least his own,
at risk of damnation. His ideas would pit him against numerous scholars, priests, bishops, princes, and the Pope, even as others adopted or adapted his cause, ultimately dividing the Church against itself. A World Ablaze is a tale not just of religious debate but of political intrigue, of shifting
alliances and daring escapes, with Luther often narrowly avoiding capture, which might have led to execution. The conflict would eventually encompass the whole of Christendom and served as the crucible in which a new world was forged. The Luther we find in these pages is not a statue to be admired but a complex figure -- brilliant and volatile, fretful and self-righteous, curious and stubborn. Harline brings out the immediacy, uncertainty, and drama of his story, giving readers a sense of what it felt like in the moment, when the
ending was still very much in doubt. The result is a masterful recreation of a momentous turning point in the history of the world.

Craig Harline is the author of numerous books on the history of Christianity, especially during the Reformation, including Conversions: Two Family Stories From the Reformation and Modern America (2011), which was a finalist for the Mark Lynton History Prize from the Columbia School of Journalism, and Sunday: A History of the First Day From Babylonia to the Super Bowl (2007), which was one of Publishers Weekly's Best Religion Books of the Year. His memoir, Way Below the Angels: The Pretty Clearly Troubled But Not Even Close to Tragic Confessions of a Real Live Mormon Missionary (2014)received Foreword Reviews' INDIEFAB Book of the Year award in the category of Religion. He is currently Professor of History at Brigham Young University, and has been a visiting professor at the Katholieke Universiteit Leuven, in Belgium.
Loading...
or support indie stores by buying on