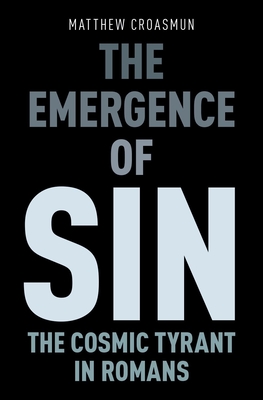 The Emergence of Sin (Hardcover)

The Cosmic Tyrant in Romans

We can have a sense that when we try to do right by one another, we aren't merely striving against ourselves. The feeling is that we are struggling against something--someone-else. As if there's a force-a person- that wishes us ill. In his letter to the Romans, the apostle Paul describes just such a person: Sin, a cosmic tyrant who constrains our moral freedom, confuses our moral judgment, and condemns us to slavery and to death. Commentators have long argued about whether Paul literally means to say Sin is a person or is simply indulging in literary personification, but regardless of Paul's intentions, for modern readers it would seem clear enough: there is no such thing as a cosmic tyrant. Surely it is more reasonable to suppose "Sin" is merely a colorful way of describing individual misdeeds or, at most, a way of evoking the intractability of our social ills. In The Emergence of Sin, Matthew Croasmun suggests we take another look. The vision of Sin he offers is at once scientific and theological, social and individual, corporeal and mythological. He argues both that the cosmic power Sin is nothing more than an emergent feature of a vast human network of transgression and that this power is nevertheless real, personal, and one whom we had better be ready to resist. Ultimately, what is on offer here is an account of the world re-mythologized at the hands of chemists, evolutionary biologists, sociologists, and entomologists. In this world, Paul's text is not a relic of a forgotten mythical past, but a field manual for modern living.

Matthew Croasmun is Associate Research Scholar and Director of the Life Worth Living Program at the Yale Center for Faith & Culture and Lecturer of Divinity and Humanities at Yale University. He completed his Ph.D. in Religious Studies (New Testament) at Yale in 2014 and was a recipient of the 2015 Manfred Lautenschl�ger Award for Theological Promise for his dissertation, "The Body of Sin: An Emergent Account of Sin as a Cosmic Power in Romans 5-8."
or
Not Currently Available for Direct Purchase
Copyright © 2020 American Booksellers Association