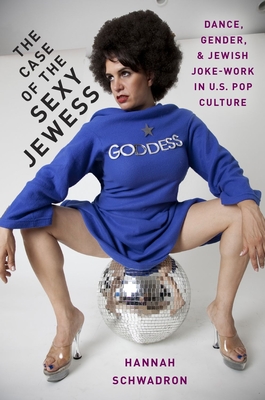 The Case of the Sexy Jewess (Paperback)

Dance, Gender and Jewish Joke-Work in Us Pop Culture

Amidst the growing forums of kinky Jews, orthodox drag queens, and Jewish geisha girls, we find today's sexy Jewess in a host of reflexive plays with sexed-up self-display. A social phantasm with real legs, she moves boldly between neo-burlesque striptease, comedy television, ballet movies, and progressive porn to construct the 21st Century Jewish American woman through charisma and comic craft, in-your-face antics, and offensive charm. Her image redresses longstanding stereotypes of the hag, the Jewish mother, and Jewish American princess that have demeaned the Jewish woman as overly demanding, inappropriate, and unattractive across the 20th century, even as Jews assimilated into the American mainstream. But why does "sexy" work to update tropes of the Jewish woman? And how does sex link to humor in order for this update to work? Entangling questions of sexiness to race, gender, and class, The Case of the Sexy Jewess frames an embodied joke-work genre that is most often, but not always meant to be funny. In a contemporary period after the thrusts of assimilation and women's liberation movements, performances usher in new versions of old scripts with ranging consequences. At the core is the recuperative performance of identity through impersonation, and the question of its radical or conservative potential. Appropriating, re-appropriating, and mis-appropriating identity material within and beyond their midst, Sexy Jewess artists play up the failed logic of representation by mocking identity categories altogether. They act as comic chameleons, morphing between margin and center in countless number of charged caricatures. Embodying ethnic and gender positions as always already on the edge while ever more in the middle, contemporary Jewish female performers extend a comic tradition in new contexts, mobilizing progressive discourses from positions of newfound race and gender privilege.