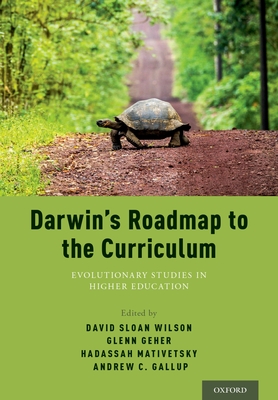 Darwin's Roadmap to the Curriculum

There is a paradox when it comes to Darwinian ideas within the academy. On one hand, Darwin's theories have famously changed the foundational ideas related to the origins of life, shaping entire disciplines in the biological sciences. On the other hand, people in educated societies across the
globe today are famously misinformed and uneducated about Darwinian principles and ideas. Applications of evolutionary theory outside the traditional areas of biology have been slow to progress, and scholars doing such work regularly run into all kinds of political backlash. However, a slow but
steady push to advance the teaching of evolution across academic disciplines has been under way for more than a decade. This book serves to integrate the vast literature in the interdisciplinary field of Evolutionary Studies (EvoS), providing clear examples of how evolutionary concepts relate to all facets of life. Further, this book provides chapters dedicated to the processes associated with an EvoS education,
including examples of how an interdisciplinary approach to evolutionary theory has been implemented successfully at various colleges, universities, and degree programs. This book also offers chapters outlining a variety of applications to an evolution education, including improved sustainable
development, medical practices, and creative and critical thinking skills. Exploring controversies surrounding evolution education, this volume provides a roadmap to asking and answering Darwinian questions across all areas of intellectual inquiry.

David Sloan Wilson is Distinguished Professor of Biological Sciences and Anthropology at Binghamton University. He is one of the main architects of Multilevel Selection Theory, which explains how adaptations can evolve-or fail to evolve-at any level of a multi-tier hierarchy. He started the firstprogram teaching evolution across the curriculum at Binghamton University. Glenn Geher is Professor of Psychology and Founding Director of Evolutionary Studies at the State University of New York at New Paltz. He has won numerous awards in the domains of teaching and research, including the SUNY Chancellor's Award for Excellence in both Teaching and Scholarship. Anadvocate of evolution education, Geher has published extensively on various topics related to evolution and human behavior. Hadassah Mativetsky is a software quality engineer. Prior to working as an engineer, Hadassah was the Evolutionary Studies Coordinator at Binghamton University under the direction of David Sloan Wilson. She has an MS in Systems Science with a focus on evolutionary approaches. She tweets about STEMat @Haddie. Andrew C. Gallup is Assistant Professor of Evolutionary Cognitive Neuroscience and Director of the Adaptive Behavior and Cognition Lab at SUNY Polytechnic Institute. He has published over 75 journal articles and book chapters, and currently serves as an Associate Editor for Evolutionary BehavioralSciences, Frontiers in Evolutionary Psychology, Frontiers in Social and Evolutionary Neuroscience, and PLOS ONE.
Loading...
or support indie stores by buying on