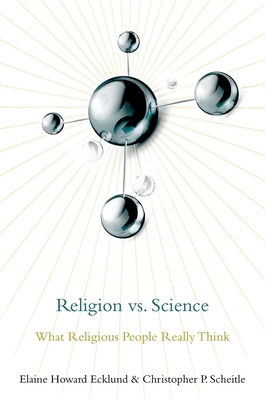 At the end of a five-year journey to find out what religious Americans think about science, Ecklund and Scheitle emerge with the real story of the relationship between science and religion in American culture. Based on the most comprehensive survey ever done-representing a range of religious traditions and faith positions-Religion vs. Science is a story that is more nuanced and complex than the media and pundits would lead us to believe. The way religious Americans approach science is shaped by two fundamental questions: What does science mean for the existence and activity of God? What does science mean for the sacredness of humanity? How these questions play out as individual believers think about science both challenges stereotypes and highlights the real tensions between religion and science. Ecklund and Scheitle interrogate the widespread myths that religious people dislike science and scientists and deny scientific theories. Religion vs. Science is a definitive statement on a timely, popular subject. Rather than a highly conceptual approach to historical debates, philosophies, or personal opinions, Ecklund and Scheitle give readers a facts-on-the-ground, empirical look at what religious Americans really understand and think about science.

Elaine Howard Ecklund is Herbert S. Autrey Chair in Social Sciences and Professor of Sociology at Rice University. She is a sociologist whose research addresses religion in public life, particularly how individuals use race, gender, and religious identities to bring changes to religious and scientific institutions. She is the author of over sixty peer-reviewed articles, two books with Oxford University Press (including Science vs. Religion: What Scientists Really Think). She has received grants from the National Science Foundation, Russell Sage Foundation, John Templeton Foundation, Templeton World Charity Foundation, and the Society for the Scientific Study of Religion. Christopher P. Scheitle is Assistant Professor of Sociology at West Virginia University. He has published over thirty peer-reviewed articles, two books, and has been awarded two grants by the National Science Foundation.
Loading...
or
Not Currently Available for Direct Purchase