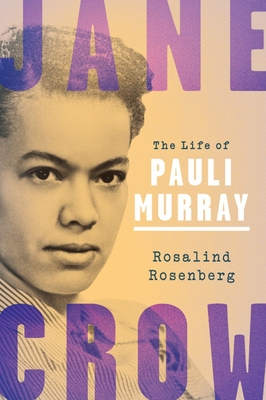 The Life of Pauli Murray

Throughout her prodigious life, activist and lawyer Pauli Murray systematically fought against all arbitrary distinctions in society, channeling her outrage at the discrimination she faced to make America a more democratic country. In this definitive biography, Rosalind Rosenberg offers a
poignant portrait of a figure who played pivotal roles in both the modern civil rights and women's movements. A mixed-race orphan, Murray grew up in segregated North Carolina before escaping to New York, where she attended Hunter College and became a labor activist in the 1930s. When she applied to graduate school at the University of North Carolina, where her white great-great-grandfather had been a
trustee, she was rejected because of her race. She went on to graduate first in her class at Howard Law School, only to be rejected for graduate study again at Harvard University this time on account of her sex. Undaunted, Murray forged a singular career in the law. In the 1950s, her legal
scholarship helped Thurgood Marshall challenge segregation head-on in the landmark Brown v. Board of Education case. When appointed by Eleanor Roosevelt to the President's Commission on the Status of Women in 1962, she advanced the idea of Jane Crow, arguing that the same reasons used to condemn race discrimination could be used to battle gender discrimination. In 1965, she became the first African American to
earn a JSD from Yale Law School and the following year persuaded Betty Friedan to found an NAACP for women, which became NOW. In the early 1970s, Murray provided Ruth Bader Ginsburg with the argument Ginsburg used to persuade the Supreme Court that the Fourteenth Amendment to the Constitution
protects not only blacks but also women - and potentially other minority groups - from discrimination. By that time, Murray was a tenured history professor at Brandeis, a position she left to become the first black woman ordained a priest by the Episcopal Church in 1976. Murray accomplished all this while struggling with issues of identity. She believed from childhood she was male and tried unsuccessfully to persuade doctors to give her testosterone. While she would today be identified as transgender, during her lifetime no social movement existed to support this
identity. She ultimately used her private feelings of being in-between to publicly contend that identities are not fixed, an idea that has powered campaigns for equal rights in the United States for the past half-century.

Rosalind Rosenberg is Professor of History Emerita at Barnard College, Columbia University. She is the author of Divided Lives: American Women in the Twentieth Century, Changing the Subject: How the Women of Columbia Shaped the Way We Think About Sex and Politics, and Beyond Separate Spheres: Intellectual Roots of Modern Feminism.
Loading...
or support indie stores by buying on