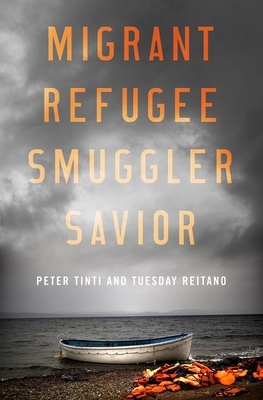 Migrant, Refugee, Smuggler, Savior investigates one of the most under-examined aspects of the great migration crisis of our time. As millions seek passage to Europe, in order to escape violent conflicts, repressive governments, and crushing poverty, their movements are enabled and actively encouraged by criminal networks that amass billions of dollars by facilitating their transport.
Many of these smugglers carry out their activities with little regard for human rights, which has led to a manifold increase in human suffering, not only in the Mediterranean Sea, but also along the overland smuggling routes that cross the Sahara, penetrate deep into the Balkans, and through hidden corners of Europe's capitals. But some of these smugglers are revered as saviors by those they move, for it is they who deliver men, women, and children to a safer place and a better life. Disconcertingly, it is often criminals who help the most desperate among us when the international system fails to come to their aid.
This book is a measured attempt, born of years of research and reporting in the field, to better understand how human-smuggling networks function, the ways in which they have evolved, and what they mean for peace and security in the future.

Peter Tinti is an independent journalist and Senior Research Fellow at the Global Initiative Against Transnational Organised Crime. Formerly based in West Africa, his writing, reporting, and photography has appeared in The New York Times, The Wall Street Journal, Foreign Policy, Vice, among other outlets. Tuesday Reitano has been studying organized crime networks and their impact on governance, conflict and development for over twenty years, both in the UN System, and as the head of the Global Initiative Against Transnational Organised Crime, which she co-founded in 2013. She is based in Beirut, Lebanon.
or
Buy Here
Copyright © 2020 American Booksellers Association