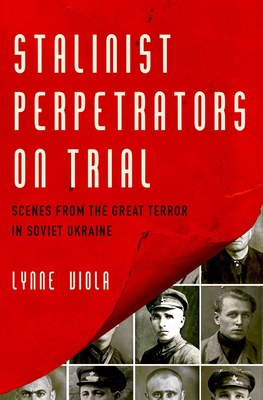 Scenes from the Great Terror in Soviet Ukraine

Between the summer of 1937 and November 1938, the Stalinist regime arrested over 1.5 million people for counterrevolutionary and anti-Soviet activity and either summarily executed or exiled them to the Gulag. While we now know a great deal about the experience of victims of the Great Terror, we know almost nothing about the lower- and middle-level Narodnyi Komissariat Vnutrennikh Del (NKVD), or secret police, cadres who carried out Stalin's murderous policies. Unlike the postwar, public trials of Nazi war criminals, NKVD operatives were tried secretly. And what exactly happened in those courtrooms was unknown until now. In what has been dubbed the purge of the purgers, almost one thousand NKVD officers were prosecuted by Soviet military courts. Scapegoated for violating Soviet law, they were charged with multiple counts of fabrication of evidence, falsification of interrogation protocols, use of torture to secure confessions, and murder during pre-trial detention of suspects - and many were sentenced to execution themselves. The documentation generated by these trials, including verbatim interrogation records and written confessions signed by perpetrators; testimony by victims, witnesses, and experts; and transcripts of court sessions, provides a glimpse behind the curtains of the terror. It depicts how the terror was implemented, what happened, and who was responsible, demonstrating that orders from above worked in conjunction with a series of situational factors to shape the contours of state violence. Based on chilling and revelatory new archival documents from the Ukrainian secret police archives, Stalinist Perpetrators on Trial illuminates the darkest recesses of Soviet repression -- the interrogation room, the prison cell, and the place of execution -- and sheds new light on those who carried out the Great Terror.

Lynne Viola is Professor of History at the University of Toronto. She is the author of The Unknown Gulag: The Lost World of Stalin's Special Settlements, Peasant Rebels Under Stalin, The Best Sons of the Fatherland, co-editor of Russian Peasant Women, and editor/co-editor of six other books. Viola is a recipient of the Thomas Henry Pentland Molson Prize from the Canada Council for the Arts.
Loading...
or
Not Currently Available for Direct Purchase