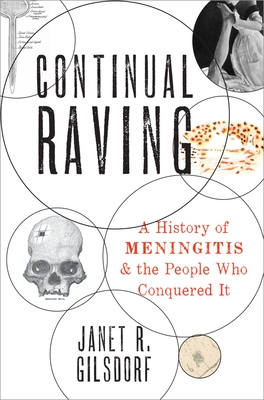 A History of Meningitis and the People Who Conquered It

Not all scientific discoveries are genius. Continual Raving tells the combined stories of how scientists across the 19th and 20th centuries defeated meningitis -- not through flawless scientific research, but often through a series of serendipitous events, misplaced assumptions, and flawed conclusions. The result is a story of not just a vanquished disease, but how scientific accomplishment sometimes occurs where it's least expected. Although symptoms of meningitis were recorded as early as Hippocrates and the ancient Greeks, our understanding of the disease's origins and mechanisms remained obscure for most of human history. That changed in 1892, when German physician Richard Pfeiffer observed and isolated bacteria ultimately shown to cause meningitis in children -- and concluded that those bacteria cause influenza. Haemophilus influenzae, as thee meningitis-causing bacteria have been erroneously named ever since, continued their strange journey to discovery in the decades that followed. Continual Raving traces the disease's strange encounters with science, including: - Heinrich Quincke, the German internist who first used a needle to draw spinal fluid from between a patient's back bones
- Simon Flexner's management of American meningitis epidemics using immune serum from a horse
- American bacteriologist Margaret Pittman's discovery (during the Great Depression, no less) of a sugar overcoat that protects the bacteria from white blood cells
- Pediatrician Ashley Weech, who gave the first antibiotic used in America (based on instructions written in German) to a young patient sick with meningitis
- Microbiologist Hattie Alexander, who learned why these antibiotics sometimes fail in such patients
- Four scientists, in two teams, as they vied to be the first to create the right vaccine to prevent meningitis in infants In each of these deeply human stories, variables of chance, circumstance, and incorrect assumptions intervene to shape not just the arc of the scientists' lives, but the trajectory of how humans have come to understand one of our most pernicious diseases. Continual Raving is a mosaic tale of how science conquered meningitis -- and a larger story of the sometimes winding road to discovery.

Janet R. Gilsdorf, MD, is the Robert P. Kelch Research Professor Emerita at the University of Michigan, where she cares for children with complex infectious diseases and formerly directed the Haemophilus influenzae research laboratory. Her scientific endeavors involve elucidating the epidemiology of bacterial infections, exploring how bacteria cause infections, and developing vaccines to prevent ear infections in children.
Loading...
or support indie stores by buying on