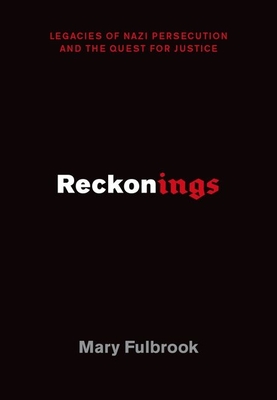 Legacies of Nazi Persecution and the Quest for Justice

Winner of the Wolfson History Prize 2019 Shortlisted for the 2019 Cundill History Prize From the Holocaust Museum in Washington, D.C. to the stumbling stones embedded in Berlin sidewalks, memorials to victims of Nazi violence have proliferated across the globe. More than a million visitors -- as many as killed there during its operation -- now visit Auschwitz each year. There is no
shortage of commemoration of Nazi crimes. But has there been justice? Reckonings shows persuasively that there has not. The name Auschwitz, for example, is often evoked to encapsulate the Holocaust. Yet focusing on one concentration camp, however horrific the scale of the crimes committed there,
does not capture the myriad ways individuals became tangled up on the side of the perpetrators, or the diversity of experiences among their victims. And it can obscure the continuing legacies of Nazi persecution across generations and across continents. Exploring the lives of individuals across a spectrum of suffering and guilt -- each one capturing one small part of the greater story -- Mary Fulbrook's haunting and powerful book uses reckoning in the widest possible sense: to reveal the disparity between the extent of inhumanity and later attempts
to interpret and rectify wrongs, as the consequences of violent reverberated through time. From the early brutality of political oppression and anti-Semitic policies, through the euthanasia program, to the full devastation of the ghettos and death camps, then moving across the post-war decades of
selective confrontation with perpetrators and ever-expanding recognition of victims, Reckonings exposes the disjuncture between official myths about dealing with the past and the fact that the vast majority of Nazi perpetrators were never held accountable. In the successor states to the Third
Reich -- East Germany, West Germany, and Austria -- prosecution varied widely and selective justice was combined with the reintegration of former Nazis. Meanwhile, those who had lived through this period, as well as their children, the second generation, continued to face the legacies of Nazism in
the private sphere - in ways often at odds with those of public remembrance and memorials. By following the various phases of trials and testimonies, from those immediately after the war through succeeding decades and up to the present, Reckonings illuminates the shifting accounts by which both perpetrators and survivors have assessed the significance of this past for subsequent
generations, and calibrates anew the scales of justice.

Mary Fulbrook is Professor of German History at University College London and the author of the Fraenkel Prize-winning A Small Town near Auschwitz: Ordinary Nazis and the Holocaust.
Loading...
or
Not Currently Available for Direct Purchase