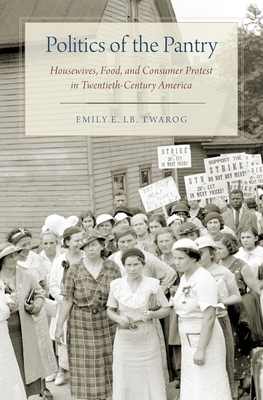 Politics of the Pantry

The history of women's political involvement has focused heavily on electoral politics, but throughout the twentieth century women engaged in grassroots activism when they found it increasingly challenging to feed their families and balance their household ledgers. Politics of the Pantry examines how working- and middle-class American housewives used their identity as housewives to protest the high cost of food. In doing so, housewives' relationships with the state evolved over the course of the century. Shifting the focus away from the workplace as a site of protest, Emily E. LB. Twarog looks to the homefront as a starting point for protest in the public sphere. With a focus on food consumption rather than production, Twarog looks closely at the ways food--specifically meat--was used by women as a political tool. Engaging in domestic politics, housewives both challenged and embraced the social and economic order as they sought to craft a unique political voice and build a consumer movement focused on the home. The book examines key moments when women used consumer actions to embrace their socially ascribed roles as housewives to demand economic stability for their families and communities. These include the Depression-era meat boycott of 1935, the consumer coalitions of the New Deal, and the wave of consumer protests between 1966 and 1973. Twarog introduces numerous labor and consumer activists and their organizations in both urban and suburban areas--Detroit, greater Chicago, Long Island, and Los Angeles.

Emily E. LB. Twarog is an Assistant Professor Labor Studies and American History in the School of Labor and Employment Relations at the University of Illinois at Urbana-Champaign.
Loading...
or
Not Currently Available for Direct Purchase