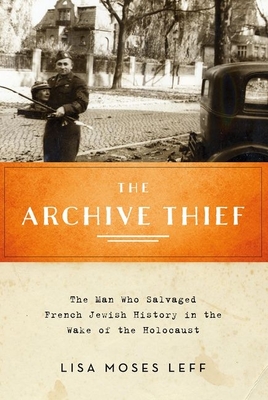 In the aftermath of the Holocaust, the Jewish historian Zosa Szajkowski stole tens of thousands of archival documents related to French Jewish history from public archives and collections in France and moved them, illicitly, to New York. Why did this respectable historian become a thief? And why did librarians in the United States and Israel accept these materials from him, turning a blind eye to the signs of ownership they bore? With her award-winning book, The Archive Thief, Lisa Moses Leff reconstructs Szajkowski's gripping story in all its ambiguity. Born into poverty in Russian Poland in 1911, Szajkowski was a self-made man who managed to make a life for himself as an intellectual, first as a journalist in 1930s Paris, and then, after a harrowing escape to New York in 1941, as a scholar. Although he never taught at a university or even earned a PhD, Szajkowski became one of the world's foremost experts on the history of the Jews in modern France, publishing in Yiddish, English, and Hebrew. His work opened up new ways of thinking about Jewish emancipation, economic and social modernization, and the rise of modern anti-Semitism. But beneath Szajkowski's scholarly accomplishments lay his shameful secret: his pathbreaking articles were based upon documents that he moved illicitly to New York. Eventually, he sold these documents, piecemeal, to American and Israeli research libraries where they still remain. Leff takes us into the backstage of the archives, revealing the powerful ideological, economic, and psychological forces that made Holocaust-era Jewish scholars care more deeply than ever before about preserving the remnants of their past. As Leff shows, it is only when we understand the issues at the heart of his story, in all their ambiguity and complexity, that we can begin to address the larger questions of the rightful ownership of Jewish archives, as well as other contested archives, that are still at issue today.

Lisa Moses Leff is Professor of History at American University, where she is also affiliated with the Jewish studies program. She is the author of Sacred Bonds of Solidarity: The Rise of Jewish Internationalism in Nineteenth-century France.
or support indie stores by buying on
Copyright © 2020 American Booksellers Association