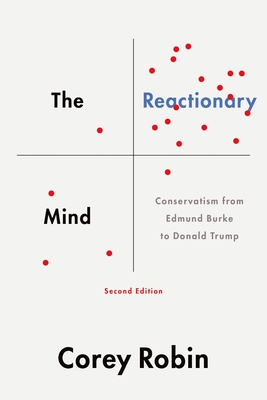 Late in life, William F. Buckley made a confession to Corey Robin. Capitalism is boring, said the founding father of the American right. Devoting your life to it, as conservatives do, is horrifying if only because it's so repetitious. It's like sex. With this unlikely conversation began
Robin's decade-long foray into the conservative mind. What is conservatism, and what's truly at stake for its proponents? If capitalism bores them, what excites them? In The Reactionary Mind, Robin traces conservatism back to its roots in the reaction against the French Revolution. He argues that the right was inspired, and is still united, by its hostility to emancipating the lower orders. Some conservatives endorse the free market; others oppose it. Some
criticize the state; others celebrate it. Underlying these differences is the impulse to defend power and privilege against movements demanding freedom and equality -- while simultaneously making populist appeals to the masses. Despite their opposition to these movements, conservatives favor a
dynamic conception of politics and society -- one that involves self-transformation, violence, and war. They are also highly adaptive to new challenges and circumstances. This partiality to violence and capacity for reinvention have been critical to their success. Written by a highly-regarded, keen observer of the contemporary political scene, The Reactionary Mind ranges widely, from Edmund Burke to Antonin Scalia and Donald Trump, and from John C. Calhoun to Ayn Rand. It advances the notion that all right-wing ideologies, from the eighteenth century through
today, are improvisations on a theme: the felt experience of having power, seeing it threatened, and trying to win it back. When its first edition appeared in 2011, The Reactionary Mind set off a fierce debate. It has since been acclaimed as the book that predicted Trump (New Yorker) and one of
the more influential political works of the last decade (Washington Monthly). Now updated to include Trump's election and his first one hundred days in office, The Reactionary Mind is more relevant than ever.

Corey Robin teaches political science at Brooklyn College and the CUNY Graduate Center. His writings have appeared in the New York Times, Harper's, and the London Review of Books.
Loading...
or support indie stores by buying on