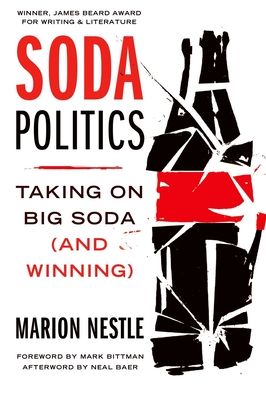 Sodas are astonishing products. Little more than flavored sugar-water, these drinks cost practically nothing to produce or buy, yet have turned their makers--principally Coca-Cola and PepsiCo--into a multibillion-dollar industry with global recognition, distribution, and political power. Billed as refreshing, tasty, crisp, and the real thing, sodas also happen to be so well established to contribute to poor dental hygiene, higher calorie intake, obesity, and type-2 diabetes that the first line of defense against any of these conditions is to simply stop drinking them. Habitually drinking large volumes of soda not only harms individual health, but also burdens societies with runaway healthcare costs. So how did products containing absurdly inexpensive ingredients become multibillion dollar industries and international brand icons, while also having a devastating impact on public health? In Soda Politics, the 2016 James Beard Award for Writing & Literature Winner, Dr. Marion Nestle answers this question by detailing all of the ways that the soft drink industry works overtime to make drinking soda as common and accepted as drinking water, for adults and children. Dr. Nestle, a renowned food and nutrition policy expert and public health advocate, shows how sodas are principally miracles of advertising; Coca-Cola and PepsiCo spend billions of dollars each year to promote their sale to children, minorities, and low-income populations, in developing as well as industrialized nations. And once they have stimulated that demand, they leave no stone unturned to protect profits. That includes lobbying to prevent any measures that would discourage soda sales, strategically donating money to health organizations and researchers who can make the science about sodas appear confusing, and engaging in Corporate Social Responsibility (CSR) activities to create goodwill and silence critics. Soda Politics follows the money trail wherever it leads, revealing how hard Big Soda works to sell as much of their products as possible to an increasingly obese world. But Soda Politics does more than just diagnose a problem--it encourages readers to help find solutions. From Berkeley to Mexico City and beyond, advocates are successfully countering the relentless marketing, promotion, and political protection of sugary drinks. And their actions are having an impact--for all of the hardball and softball tactics the soft drink industry employs to maintain the status quo, soda consumption has been flat or falling for years. Health advocacy campaigns are now the single greatest threat to soda companies' profits. Soda Politics provides readers with the tools they need to keep up pressure on Big Soda in order to build healthier and more sustainable food systems.

Dr. Marion Nestle is Paulette Goddard Professor in the Department of Nutrition, Food Studies, and Public Health and Professor of Sociology at New York University. Her degrees include a Ph.D. in molecular biology and an M.P.H. in public health nutrition, both from the University of California, Berkeley. From 1986-88, she was senior nutrition policy advisor in the Department of Health and Human Services and managing editor of the 1988 Surgeon General's Report on Nutrition and Health. She has been a member of the FDA Food Advisory Committee and Science Board, the USDA/DHHS Dietary Guidelines Advisory Committee, and American Cancer Society committees that issue dietary guidelines for cancer prevention. She is also the author of Eat Drink Vote: An Illustrated Guide to Food Politics (Rodale, 2013), Why Calories Count: From Science to Politics (Berkeley, 2012), Safe Food: The Politics of Food Safety (Berkeley, 2010), Food Politics: How the Food Industry Influences Nutrition and Health (Berkeley, 2007), which won awards from the Association for American Publishers and the James Beard Foundation; and What to Eat (North Point, 2006), which was named one of Amazon's top ten books of 2006. You can read her blog at www.foodpolitics.com.
Loading...
or
Not Currently Available for Direct Purchase