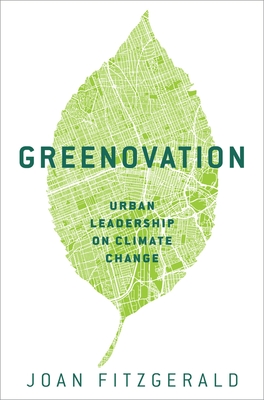 Collectively, cities take up a relatively tiny amount of land on the earth, yet emit 72 percent of greenhouse gas emissions. Clearly, cities need to be at the center of any broad effort to reduce climate change. In Greenovation, the eminent urban policy scholar Joan Fitzgerald argues that too many cities are only implementing random acts of greenness that will do little to address the climate crisis. She instead calls for greenovation--using the city as a test bed for adopting and perfecting green
technologies for more energy--efficient buildings, transportation, and infrastructure more broadly. Further, Fitzgerald contends that while many city mayors cite income inequality as a pressing problem, few cities are connecting climate action and social justice-another aspect of greenovation.
Focusing on the biggest producers of greenhouse gases in cities, buildings, energy and transportation, Fitzgerald examines how greenovating cities are reducing emissions overall and lays out an agenda for fostering and implementing urban innovations that can help reverse the path toward irrevocable
climate damage. Drawing on interviews with practitioners in more than 20 North American and European cities, she identifies the strategies and policies they are employing and how support from state, provincial and national governments has supported or thwarted their efforts. A uniquely urban-focused appraisal of the economic, political, and social debates that underpin the drive to go green, Greenovation helps us understand what is arguably the toughest policy problem of our era: the increasing impact of anthropocentric climate change on modern social life.

Joan Fitzgerald is a professor of Urban and Public Policy at Northeastern University. She focuses on urban climate action and the connections between urban sustainability and economic development and innovation. In addition, she examines how climate action can create opportunity for revitalizationof low-income communities. Her third book, Emerald Cities: Urban Sustainability and Economic Development (Oxford), illustrates how cities are creating economic development opportunities in several green sectors.
Loading...
or support indie stores by buying on