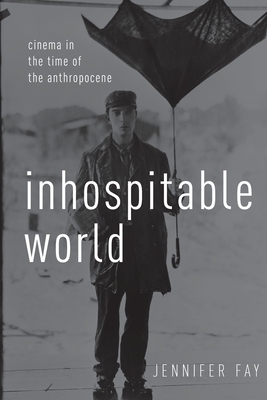 Cinema in the Time of the Anthropocene

In recent years, environmental and human rights advocates have suggested that we have entered the first new geological epoch since the end of the ice age: the Anthropocene. In this new epoch, humans have come to reshape unwittingly both the climate and natural world; humankind has caused mass extinctions of plant and animal species, polluted the oceans, and irreversibly altered the atmosphere. Ironically, our efforts to make the planet more hospitable to ourselves seem to be driving us toward our inevitable extinction. A force of nature, humanity is now decentered as the agent of history. As Jennifer Fay argues, this new situation is to geological science what cinema has always been to human culture. Film, like the Anthropocene, is a product of the industrial revolution, but arises out of a desire to preserve life and master time and space. It also calls for the creation of artificial worlds, unnatural weather, and deadly environments for entertainment, scientific study, and devising military strategy. Filmmaking stages, quite literally, the process by which worlds and weather come into being and meaning, and it mimics the forces that are driving this new planetary inhospitality. Cinema, in other words, provides an image of nature in the age of its mechanical reproducability. Fay argues that cinema exemplifies the philosophical, political, and perhaps even logistical processes by which we can adapt to these forces and also imagine a world without humans in it. Whereas standard ecological criticism attends to the environmental crisis as an unraveling of our natural state, this book looks to film (from Buster Keaton, to Jia Zhangke, to films of atomic testing and early polar exploration) to consider how it reflects upon the creation and destruction of human environments. What are the implications of ecological inhospitality? What role might cinema and media theory play in challenging our presumed right to occupy and populate the world? As an art form, film enjoys a unique relationship to the material, elemental world it captures and produces. Through it, we may appreciate the ambitions to design an unhomely planet that may no longer accommodate us.

Jennifer Fay is Associate Professor of Film and English at Vanderbilt University where she also directs the Program in Cinema and Media Arts. Her books include Theaters of Occupation: Hollywood and the Reeducation of Postwar Germany (Minnesota, 2008) and Film Noir: Hard-Boiled Modernity and the Cultures of Globalization co-authored with Justus Nieland (Routledge, 2010).
Loading...
or
Not Currently Available for Direct Purchase