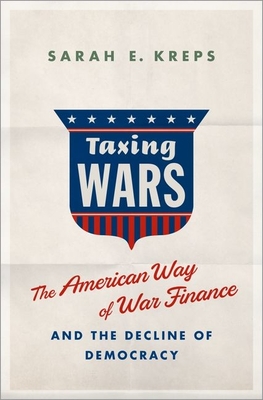 The American Way of War Finance and the Decline of Democracy

Why have the wars in Afghanistan and Iraq lasted longer than any others in American history? The conventional wisdom suggests that the move to an all-volunteer force and unmanned technologies such as drones have reduced the apparent burden of war so much that they have allowed these conflicts
to continue almost unnoticed for years. Taxing Wars suggests that the burden in blood is just one side of the coin. The way Americans bear the burden in treasure has also changed, and these changes have both eroded accountability and contributed to the phenomenon of perpetual war. Sarah Kreps chronicles the entire history of how America has paid for its wars-and how its methods have changed. Early on, the United States imposed war taxes that both demanded sacrifices from all Americans and served as reminders of their participation. Indeed, thinkers from Immanuel Kant to Adam
Smith argued that these reminders were exactly the reason why democracies tended to fight shorter and less costly wars. Bearing these burdens caused the populace to sue for peace when the costs mounted. Leaders in a democracy, responsive to their citizens, would have incentives to heed that
opposition and bring wars to as expeditious an end as possible. Since the Korean War, the United States has increasingly moved away from war taxes. Instead, borrowing-and its comparatively less visible connection with the war-has become a permanent feature of contemporary wars. The move serves leaders well because reducing the apparent burden of war has helped
mute public opposition and any decision-making constraints. But by masking accountability, however, the move away from war taxes undermines the basis for democratic restraint in wartime. Contemporary wars have become correspondingly longer and costlier as the public has become disconnected from
those burdens. Given the trends identified in Taxing Wars, the recent past-epitomized by our lengthy wars in Afghanistan and Iraq-is likely to be prologue.

Sarah Kreps is Associate Professor of Government and Adjunct Professor of Law at Cornell University. Kreps is the author of numerous books and academic articles on the topics of international security, in particular alliance politics, military technology, and the political economy of security. Shehas a B.A. from Harvard University, M.Sc. from Oxford University, and PhD from Georgetown University. Kreps previously served in the United States Air Force and is a life member of the Council on Foreign Relations.
Loading...
or
Not Currently Available for Direct Purchase