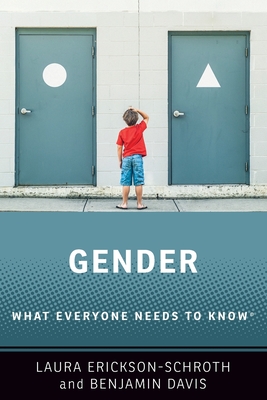 The term gender was first distinguished from sex in the 1950s, when psychologists began to discuss the idea of gender roles--behaviors and responsibilities given to people by a society rather than flowing from their biology. Over the last two decades, transgender people have expanded our understanding of gender even further, introducing to the mainstream the concept of gender identity, an individual's understanding of their own gender. Along the way, there have been numerous debates and controversies (i.e., what is the influence of biology on gender, how does the media impact gender and gender roles, and do transgender people reinforce gender stereotypes or help to free us from them?). In an easy-to-read format that includes questions and short responses, Gender: What Everyone Needs to KnowR guides the reader through basic definitions; the history of gender as a concept; the role of biology, psychology, and culture on gender; and gender norms over time and across the globe.

Laura Erickson-Schroth, MD, MA, is a psychiatrist working with LGBTQ people in New York City. She is the editor of Trans Bodies, Trans Selves, an award-winning resource guide written by and for transgender people. She is a former board member of the New York County Psychiatric Society, the Association of Gay and Lesbian Psychiatrists, and GLMA: Health Professionals Advancing LGBT Equality. She has appeared on NPR's Fresh Air and On Point, and was named to Out's OUT100 in 2014. Benjamin Davis, MA, ATR-BC, LCAT, is a psychotherapist and art therapist in New York City specializing in working with queer and trans individuals, couples, and families. In addition to private practice, Benjamin is a faculty member at New York University's Steinhardt School of Education, Culture, and Human Developement, and co-editor of Art Therapy Practices for Resilient Youth: A Strengths-Based Approach to At-Promise Children and Adolescents.
Loading...
or support indie stores by buying on