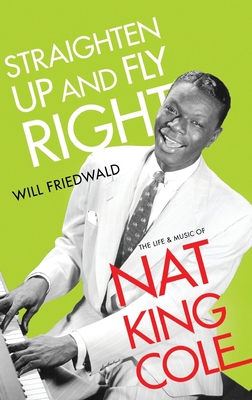 Straighten Up and Fly Right

The Life and Music of Nat King Cole (Cultural Biographies)

One of the most popular and memorable American musicians of the 20th century, Nat King Cole (1919-65) is remembered today as both a pianist and a singer, a feat rarely accomplished in the world of popular music. Now, in this complete life and times biography, author Will Friedwald offers a new
take on this fascinating musician, framing him first as a bandleader and then as a star. In Cole's early phase, Friedwald explains, his primary task of keeping his trio going was just as much of a focus for him as his own playing and singing, always a collective or group performance. In the second
act, Cole's collaborators were more likely to be arranger-conductors like Nelson Riddle and Gordon Jenkins, rather than his sidemen on bass and guitar. In the first act, his sidemen were equals, in the second phase, his collaborators were tasked exclusively with putting the focus on him, making him
sound good, while being largely invisible themselves. Friedwald brings his full musical knowledge to bear in putting the man in the work, demonstrating how this duality appears over and over again in Cole's life and career: jazz vs. pop, solo vs. trio, piano vs. voice, wife number one (Nadine) vs. wife number two (Maria), the good songs vs. the
less-than-good songs, the rhythm numbers vs. the ballads, the funny songs and novelties vs. the serious songs of love and loss, Cole as an advocate for the Great American Songbook vs. Cole the intrepid explorer of other options: world music, rhythm & blues, country & western. Cole was different
from his contemporaries in other ways; for roughly ten years after the war, the majority of hitmakers on the pop charts were veterans of the big band experience, from Sinatra on down.

Will Friedwald writes about music and popular culture for The Wall Street Journal as well as for magazines such as Vanity Fair. He is also the associate producer and writer of Michael Feinstein's Jazz and Popular Song Series at Jazz at Lincoln Center. He has produced shows for Joe's Pub at thePublic Theater, The Mabel Mercer Foundation Cabaret Convention at Lincoln Center's Rose Hall, 54 Below, Urban Stages, The Friars Club, and elsewhere.
Loading...
or support indie stores by buying on