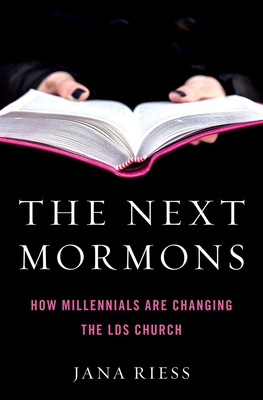 How Millennials Are Changing the Lds Church

American Millennials--the generation born in the 1980s and 1990s--have been leaving organized religion in unprecedented numbers. For a long time, the Church of Jesus Christ of Latter-day Saints was an exception: nearly three-quarters of people who grew up Mormon stayed that way into adulthood.
In The Next Mormons, Jana Riess demonstrates that things are starting to change. Drawing on a large-scale national study of four generations of current and former Mormons as well as dozens of in-depth personal interviews, Riess explores the religious beliefs and behaviors of young adult Mormons, finding that while their levels of belief remain strong, their institutional
loyalties are less certain than their parents' and grandparents'. For a growing number of Millennials, the tensions between the Church's conservative ideals and their generation's commitment to individualism and pluralism prove too high, causing them to leave the faith-often experiencing deep
personal anguish in the process. Those who remain within the fold are attempting to carefully balance the Church's strong emphasis on the traditional family with their generation's more inclusive definition that celebrates same-sex couples and women's equality. Mormon families are changing too. More
Mormons are remaining single, parents are having fewer children, and more women are working outside the home than a generation ago. The Next Mormons offers a portrait of a generation navigating between traditional religion and a rapidly changing culture.

Jana Riess is a senior columnist for Religion News Service and the author or co-author of many books, including Mormonism and American Politics, Flunking Sainthood, and The Prayer Wheel: Rediscovering Prayer with an Ancient Spiritual Practice. She has a PhD in American religious history fromColumbia University.
Loading...
or support indie stores by buying on