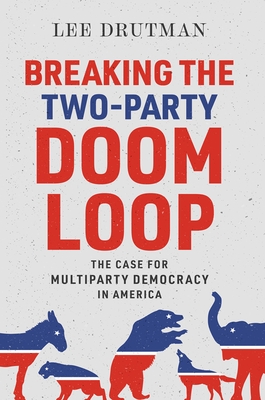 The Case for Multiparty Democracy in America

American democracy is at an impasse. After years of zero-sum partisan trench warfare, our political institutions are deteriorating. Our norms are collapsing. Democrats and Republicans no longer merely argue; they cut off contact with each other. In short, the two-party system is breaking our
democracy, and driving us all crazy. Deftly weaving together history, democratic theory, and cutting edge political science research, Drutman tells the story of how American politics became so toxic, why the country is trapped in a doom loop of escalating two-party warfare, and why it is destroying the shared sense of fairness and
legitimacy on which democracy depends. He argues that the only way out is to have more partisanship-more parties, to short-circuit the zero-sum nature of binary partisan conflict. American democracy was once stable because the two parties held within them multiple factions, which made it possible to
assemble flexible majorities and kept the temperature of political combat from overheating. But as conservative Southern Democrats and liberal Northeastern Republicans disappeared, partisan conflict flattened and pulled apart. Once the parties fully separated, toxic partisanship took over. With the
two parties divided over competing visions of national identity, Democrats and Republicans no longer see each other as opponents, but as enemies. And the more the conflict escalates, the shakier our democracy feels. Breaking the Two-Party Doom Loop makes a compelling case for large scale electoral reform-importantly, reform not requiring a constitutional amendment-that would give America more parties, making American democracy more representative, more responsive, and ultimately more stable.

Lee Drutman is a senior fellow in the Political Reform program at New America. He is the author of The Business of America is Lobbying (Oxford University Press, 2015) and winner of the 2016 American Political Science Association's Robert A. Dahl Award, given for scholarship of the highest qualityon the subject of democracy. In addition, he writes regularly for Polyarchy, a Vox blog. Drutman also teaches in the Center for Advanced Governmental Studies at The Johns Hopkins University. He holds a Ph.D. in political science from the University of California, Berkeley.
Loading...
or support indie stores by buying on