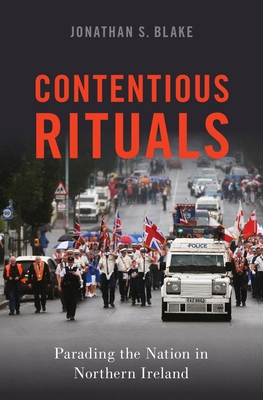 Throughout the world, divisive monuments, ceremonies, and processions assert and reinforce claims to territory, legitimacy, and dominance. These contested symbols and rituals strengthen and lend meaning to communal boundaries; confer and renew identities; and inflame tensions between groups,
polarizing communities and, at times, triggering violence. In Contentious Rituals, Jonathan S. Blake focuses on one such controversial tradition: Protestant parades in the streets of Northern Ireland. Marchers say they are celebrating their culture and commemorating their history, as they have done for two centuries. Catholics see the parades as carnivals
of bigotry and strident assertions of power. The result is heightened inter-communal friction and occasional violence. Drawing on over 80 interviews, an original survey, and ethnographic observations, Blake investigates why participants choose to march in parades that are known to be a primary
source of sectarian conflict today. His analysis reveals their reasons for acting, the meanings supplied to them, and how they make sense of the contention that surrounds them. Ultimately, he discovers, many paraders are not interested in the politics of their actions at all, but rather in the
allure of the action itself: the satisfactions of joining with others to express a collective identity and carry on a cherished tradition. An insightful exploration of the characteristics and dynamics of nationalism in action, Contentious Rituals offers an innovative approach to the contested politics of culture in divided societies and a new explanation for an old source of conflict in Northern Ireland.

Jonathan S. Blake is an associate political scientist at the nonprofit, nonpartisan RAND Corporation in Santa Monica, California. His writing on identity, conflict, and contentious politics has appeared in The Atlantic, The Nation, Los Angeles Review of Books, and other popular and academic outlets.
Loading...
or support indie stores by buying on