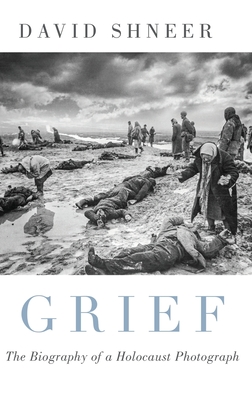 The Biography of a Holocaust Photograph

In January 1942, Soviet press photographers came upon a scene like none they had ever documented. That day, they took pictures of the first liberation of a German mass atrocity, where an estimated 7,000 Jews and others were executed at an anti-tank trench near Kerch on the Crimean peninsula. Dmitri Baltermants, a photojournalist working for the Soviet newspaper Izvestiia, took photos that day that would have a long life in shaping the image of Nazi genocide in and against the Soviet Union. Presenting never before seen photographs, Grief: The Biography of a Holocaust Photograph shows how Baltermants used the image of a grieving woman to render this gruesome mass atrocity into a transcendentally human tragedy. David Shneer tells the story of how that one photograph from the series Baltermants took that day in 1942 near Kerch became much more widely known than the others, eventually being titled Grief. Baltermants turned this shocking wartime atrocity photograph into a Cold War era artistic meditation on the profundity and horror of war that today can be found in Holocaust photo archives as well as in art museums and at art auctions. Although the journalist documented murdered Jews in other pictures he took at Kerch, in Grief there are likely no Jews among the dead or the living, save for the possible NKVD soldier securing the site. Nonetheless, Shneer shows that this photograph must be seen as an iconic Holocaust photograph. Unlike images of emaciated camp survivors or barbed wire fences, Shneer argues, the Holocaust by bullets in the Soviet Union make Grief a quintessential Soviet image of Nazi genocide.

David Shneer is the Louis P. Singer Chair of Jewish History and Professor of History, Jewish Studies, and Religious Studies at the University of Colorado, Boulder. He is the author of several prize-winning books including Through Soviet Jewish Eyes, New Jews: The End of the Jewish Diaspora, and Yiddish and the Creation of Soviet Jewish Culture.
Loading...
or support indie stores by buying on