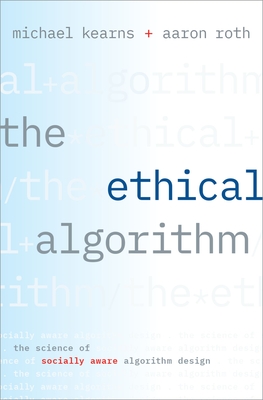 Michael Kearns is Professor and the National Center Chair in the Computer and Information Science department of the University of Pennsylvania, where he has secondary appointments in Economics and the Wharton School. He is also the Founding Director of Penn's Warren Center for Network and Data Sciences. Kearns has published widely in machine learning, artificial intelligence, algorithmic game theory and quantitative finance. He has worked extensively in the finance and technology industries, and consulted on various legal and regulatory matters involving algorithms, data, and machine learning. Together with U.V. Vazirani, he is the author of An Introduction to Computational Learning Theory. Aaron Roth is the class of 1940 Bicentennial Term Associate Professor in the Computer and Information Science department at the University of Pennsylvania, where he co-directs Penn's program in Networked and Social Systems Engineering. Roth has published widely in algorithms, machine learning, data privacy, and algorithmic game theory, and has consulted extensively about algorithmic privacy. He is the recipient of numerous awards, including a Presidential Early Career Award for Scientists and Engineers (PECASE) awarded by President Obama in 2016. Together with Cynthia Dwork, he is the author of The Algorithmic Foundations of Differential Privacy.
Loading...
or support indie stores by buying on