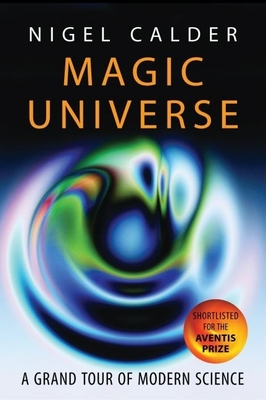 A Grand Tour of Modern Science

As a prolific author, BBC commentator, and magazine editor, Nigel Calder has spent a lifetime spotting and explaining the big discoveries in all branches of science. In Magic Universe, he draws on his vast experience to offer readers a lively, far-reaching look at modern science in all its glory, shedding light on the latest ideas in physics, biology, chemistry, medicine, astronomy, and many other fields.
What is truly magical about Magic Universe is Calder's incredible breadth. Migrating birds, light sensors in the human eye, black holes, antimatter, buckyballs and nanotubes--with exhilarating sweep, Calder can range from the strings of a piano to the superstrings of modern physics, from Pythagoras's theory of musical pitch to the most recent ideas about atoms and gravity and a ten-dimensional universe--all in one essay. The great virtue of this wide-ranging style--besides its liveliness and versatility--is that it allows Calder to illuminate how the modern sciences intermingle and cross-fertilize one another. Indeed, whether discussing astronauts or handedness or dinosaurs, Calder manages to tease out hidden connections between disparate fields of study. What is most wondrous about the "magic universe" is that one can begin with stellar dust and finish with life itself.
Drawing on interviews with more than 200 researchers, from graduate students to Nobel prize-winners, Magic Universe takes us on a high-spirited tour through the halls of science, one that will enthrall everyone interested in science, whether a young researcher in a high-tech lab or an amateur buff sitting in the comfort of an armchair.

Nigel Calder is the author of dozens of books on science, including Einstein's Universe, Restless Earth, Nuclear Nightmares, Spaceship Earth, and The Manic Sun. The former editor of New Scientist, he has conceived and scripted many special science documentaries for BBC Television. He lives in the United Kingdom.
Loading...
or
Not Currently Available for Direct Purchase