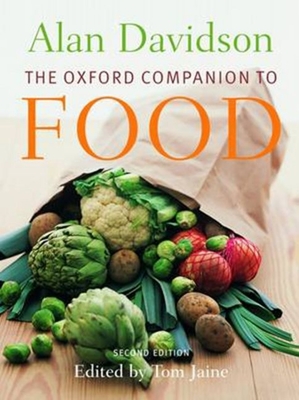 The Oxford Companion to Food

Twenty years in the making, the first edition of Alan Davidson's magnum opus appeared in 1999 to worldwide acclaim. Its combination of serious food history, culinary expertise, and entertaining serendipity was recognized as utterly unique. Including both an exhaustive catalogue of the foods that nourish humankind-fruit from tropical forests, mosses scraped from adamantine granite in Siberian wastes, or ears, eyeballs and testicles from a menagerie of animals-and a richly allusive commentary on the culture of food, whether expressed in literature and cookbooks, or as dishes peculiar to a country or community, the Oxford Companion to Food immediately found distinction.
The study of food and food history was a new discipline at the time, but one that has developed exponentially in the years since. There are now university departments, international societies, and academic journals, in addition to a wide range of popular literature exploring the meaning of food in the daily lives of people around the world.
Alan Davidson famously wrote eighty percent of the first edition, which was praised for its wit as well as its wisdom. Tom Jaine, the editor of the second edition, worked closely with Jane Davidson and Helen Saberi to ensure that new contributions continue in the same style. The result is an expanded volume that remains faithful to Davidson's peerless work. The text has been updated where necessary to keep pace with a rapidly changing subject, and Jaine assiduously alerts readers to new avenues in food studies. Agriculture; archaeology; food in art, film, literature, and music; globalization; neuroanatomy; and the Silk Road are covered for the first time, and absorbing new articles on confetti; cutlery; doggy bags; elephant; myrrh; and potluck have also found their way into the Companion.

Alan Davidson was a distinguished author and publisher, and one of the world's best-known writers on fish and fish cookery. In 1975 he retired early from the diplomatic serivice - after serving in, among other places, Washington, Egypt, Tunisia, and Laos, where he was British Ambassador - to pursue a fruitful second career as a food historian and food writer extraordinaire. Among his popular books are North Atlantic Seafood and Mediterrranean Seafood. In 2003, shortly before his death, he was awarded the Erasmus Prize for his contribution to European culture. Tom Jaine is an independent writer and publisher, specializing in food and food history. He is the author of numerous books, including Cooking in the Country, Making Bread at Home, and Traditional Country House Cooking. He frequently writes for The Times, The Guardian, the Sunday Telegraph, the Evening Standard, and many magazines and journals. He was editor of The Good Food Guide from 1989 to 1994, has presented 'The Food Programme' on Radio 4, and has frequently participated in discussions of food on radio and television. Jane Davidson is Alan Davidson's widow, and assisted him in his work, in particular as co-author of Dumas on Food. She has written many reviews of food books for Petits Propos Culinaires. She has also worked for the British Council. Helen Saberi was Alan Davidson's personal assistant, and worked very closely with him on the first edition of the Companion, as contributor, researcher, fact-checker, and proofreader. She is co-author with Alan Davidson of Trifle and The Wilder Shores of Gastronomy.
Loading...
or
Not Currently Available for Direct Purchase