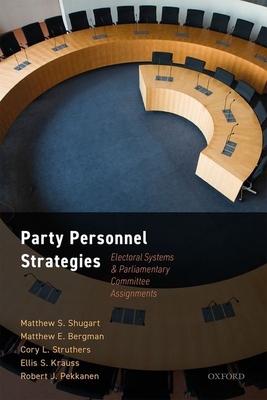 Key party goals serve to advance a policy brand and maximize seats in the legislature. This book offers a theory of how political parties assign their elected members -- their personnel -- to specialized legislative committees to serve collective organizational goals, here known as party
personnel strategies. Individual party members vary in their personal attributes, such as prior occupation, gender, and local experience. Parties seek to harness the attributes of their members by assigning them to committees where their expertise is relevant, and where they may enhance the party's policy brand. However,
under some electoral systems, parties may need to trade-off the harnessing of expertise against the pursuit of seats, instead matching legislators according to electoral situation (e.g. marginality of seat) or characteristics of their constituency (e.g. population density). This book offers an
analysis of the extent to which parties trade these goals by matching the attributes of their personnel and their electoral needs to the functions of the available committee seats. The analysis is based on a dataset of around six thousand legislators across thirty-eight elections in six established
parliamentary democracies with diverse electoral systems.

Matthew S Shugart, Distinguished Professor Emeritus, University of California, Davis, Matthew E Bergman, Post-Doctoral Researcher, University of Vienna, Cory L. Struthers, Assistant Professor, University of Georgia, Ellis S Krauss, Professor Emeritus at the School of Global Policy and Strategy, University of California, Robert J Pekkanen, Professor, University of Washington Matthew S. Shugart is Distinguished Professor Emeritus in the Department of Political Science, University of California, Davis, and Affiliated Professor of the University of Haifa. He is a world renowned scholar of democratic institutions, and a two-time winner of the George H. Hallet Award, givenannually by the Representation and Electoral Systems Section of the American Political Science Association for a book that has made a lasting contribution to the field. Matthew E. Bergman has lectured on the topics of comparative and international political economy, comparative European politics, quantitative methodologies, research design, public policy analysis, and legal reasoning. He was the founding director of the Krinsk-Houston Law & Politics Initiative atthe University of California, San Diego, and is currently a post-doctoral researcher hosted at the University of Vienna. Cory L. Struthers is an Assistant Professor in the Department of Public Administration and Policy. Her research concerns how political institutions and rules shape the incentives and decisions of elected officials and bureaucrats, with a special focus on the politics of climate change and theenvironment in American and comparative contexts. Her work has been published in Political Science Research Methods, Research & Politics, Climate and Development, and the Journal of Forestry. Ellis S. Krauss is a Professor Emeritus at the School of Global Policy and Strategy, University of California, San Diego. He has published nine authored or edited books and over 70 articles on postwar Japanese politics, comparative politics, and on U.S.-Japan relations in political science and Asianstudies journals. He was awarded the Order of the Rising Sun, 3rd Class with Gold Leaves and Neck Ribbon, from the Emperor and government of Japan for professional accomplishments. Robert J. Pekkanen is Professor at the Henry M. Jackson School of International Studies at the University of Washington. He has published articles in journals such as The American Political Science Review, The British Journal of Political Science, and Comparative Political Studies. He has publishedten books on electoral systems, American nonprofit advocacy, Japanese civil society, and Japanese elections and political parties.
Loading...
or support indie stores by buying on