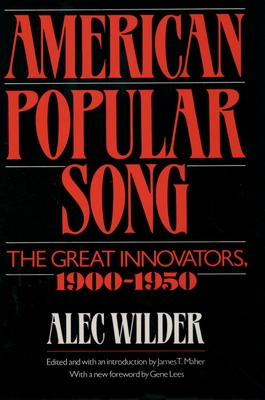 When Alec Wilder's American Popular Song first appeared, it was almost universally hailed--from The New York Times to The New Yorker to Down Beat--as the definitive account of the classic era of American popular music. It has since become the standard work of the great songwriters who dominated popular music in the United States for half a century. Now Wilder's classic is available again, with a new introduction by Gene Lees.
Uniquely analytical yet engagingly informal, American Popular Song focuses on the melodic, harmonic, and rhythmic qualities that distinguish American popular music and have made it an authentic art form. Wilder traces the roots of the American style to the ragtime music of the 1890s, shows how it was incorporated into mainstream popular music after 1900, and then surveys the careers of every major songwriter from World War I to 1950. Wilder devotes desparate chapters to such greats as Jerome Kern, Irving Berlin, George Gershwin, Richard Rodgers, Cole Porter, and Harold Arlen. Illustrated with over seven hundred musical examples, Wilder's sensitive analyses of the most distinctive, creative, and original songs of this period reveal unexpected beauties in songs long forgotten and delightful subtleties in many familiar standards. The result is a definitive treatment of a strangely unsung and uniquely American art.

Alec Wilder was the composer of such famous songs as I'll Be Around, It's So Peaceful in the Country, and While We're Young, as well as theater and film scores and chamber music for every instrument in the orchestra.
Loading...
or support indie stores by buying on