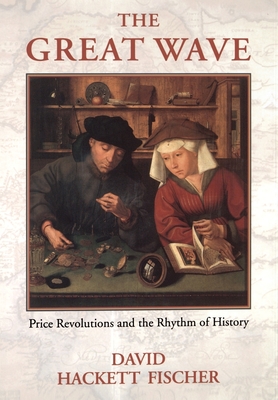 Price Revolutions and the Rhythym of History

David Hackett Fischer, one of our most prominent historians, has garnered a reputation for making history come alive--even stories as familiar as Paul Revere's ride, or as complicated as the assimilation of British culture in North America. Now, in The Great Wave, Fischer has done it again, marshaling an astonishing array of historical facts in lucid and compelling prose to outline a history of prices--the history of change, as Fischer puts it--covering the dazzling sweep of Western history from the medieval glory of Chartres to the modern day. Going far beyond the economic data, Fischer writes a powerful history of the people of the Western world: the economic patterns they lived in, and the politics, culture, and society that they created as a result. As he did in Albion's Seed and Paul Revere's Ride, two of the most talked-about history books in recent years, Fischer combines extensive research and meticulous scholarship with wonderfully evocative writing to create a book for scholars and general readers alike. Records of prices are more abundant than any other quantifiable data, and span the entire range of history, from tables of medieval grain prices to the overabundance of modern statistics. Fischer studies this wealth of data, creating a narrative that encompasses all of Western culture. He describes four waves of price revolutions, each beginning in a period of equilibrium: the High Middle Ages, the Renaissance, the Enlightenment, and finally the Victorian Age. Each revolution is marked by continuing inflation, a widening gap between rich and poor, increasing instability, and finally a crisis at the crest of the wave that is characterized by demographic contraction, social and political upheaval, and economic collapse. The most violent of these climaxes was the catastrophic fourteenth century, in which war, famine, and the Black Death devastated the continent--the only time in Europe's history that the population actually declined. Fischer also brilliantly illuminates how these long economic waves are closely intertwined with social and political events, affecting the very mindset of the people caught in them. The long periods of equilibrium are marked by cultural and intellectual movements--such as the Renaissance, the Enlightenment, and the Victorian Age-- based on a belief in order and harmony and in the triumph of progress and reason. By contrast, the years of price revolution created a melancholy culture of despair. Fischer suggests that we are living now in the last stages of a price revolution that has been building since the turn of the century. The destabilizing price surges and declines and the diminished expectations the United States has suffered in recent years--and the famines and wars of other areas of the globe--are typical of the crest of a price revolution. He does not attempt to predict what will happen, noting that uncertainty about the future is an inexorable fact of our condition. Rather, he ends with a brilliant analysis of where we might go from here and what our choices are now. This book is essential reading for anyone concerned about the state of the world today.

David Hackett Fischer is Warren Professor of History at Brandeis University. He has won numerous awards for scholarship and teaching. His many books include the highly acclaimed Paul Revere's Ride.
Loading...
or support indie stores by buying on